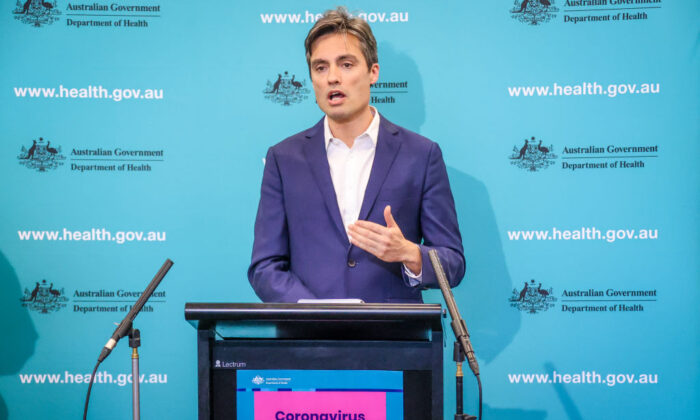 Former Deputy Chief Medical Officer Nick Coatsworth has called for Australian state governments to exempt under 12s from mandatory vaccinations, saying the decision on whether to vaccinate them should lie with the children’s parents, News.com reported.

This comes as the Therapeutic Goods Administration (TGA) considers granting provisional approval of the Spikevax (Moderna) vaccine for under 12s.

Currently, the TGA website states that Spikevax is provisionally approved for use in children 12 years and over, and Moderna has now applied to vary that provisional approval for the use of its vaccine in younger children.

The TGA is therefore assessing the potential use of Spikevax in children aged 6 to 11.

While Coatsworth has been active in promoting the vaccine rollout overall, he stressed caution when it comes to vaccinating younger children.

He told News.com on Monday that the risk to young children of serious illness from COVID-19 was minimal, highlighting that this low risk of disease has to be weighed against the risk of adverse events from the vaccine.

“Whilst I encourage parents to vaccinate their 12-15-year-old children, the risk of myocarditis especially in young boys is sufficient that parents have every right to wait for more data or to decline vaccination,” he said.

“In doing so, the child must not then be subject to differential public health treatment which is effectively ‘mandating’ by regulation.”

Myocarditis is inflammation of the heart, and according to the TGA, may rarely occur after vaccination, with the mRNA vaccines Comirnaty (Pfizer) and Spikevax (Moderna). Cases typically occur within ten days of vaccination and usually resolve after a few weeks of treatment and rest.

The TGA states that in Australia, the condition is reported in around 1 in every 100,000 people after receiving the Comirnaty vaccine and most commonly occurs in young men and teenage boys after the second dose.

According to the TGA’s Database of Adverse Event Notifications, as of Nov.9, 672 cases of myocarditis associated with COVID-19 vaccines had been reported in Australia, with three deaths.

At present, Moderna, on Nov.9, said that it was still in the trial phases of its pediatric COVID-19 vaccine “KidCOVE” study for children aged between 6 months to 12 years. But that the trial had an efficacy of 100 percent using the primary case definition for COVID-19 two weeks after the first dose of mRNA-1273 at the 50 µg dose level.

But, Coatsworth also stressed that parents should have a choice, base their decision on medical advice, and not be subject to vaccine mandates for their kids.

He also criticised the Victorian government for requiring that teenage children be vaccinated to enter certain premises, News.com reported.

“In Victoria, in particular, the chief health officer is breaching the fundamental ethical principle of autonomy in differential treatment of unvaccinated 12-15 year-olds,” he said

He added that there is no need for this policy because the vulnerable age groups have exceeded the 90 percent double-dose milestone.

The Herald Sun on Tuesday reported that the Victorian state government is still considering mandates for children aged 5-11 if the TGA approves the Moderna vaccine for that age group. This means that they would be locked out of hospitality, retail, and major events if not vaccinated.

Victorian Health Minister Martin Foley said that advice from the TGA and the national expert immunisation panel was still pending on whether the vaccine is safe and effective for younger kids.

In response to a question on whether Victoria would mandate the vaccine for 5 to 11-year-olds, Foley said: “We’ll always consult with childhood health experts and consider the best interests of our children before making any decision.”

“We’re confident we’ll see strong take-up among those aged 5-11 when the commonwealth says it is safe to do so,” he added.