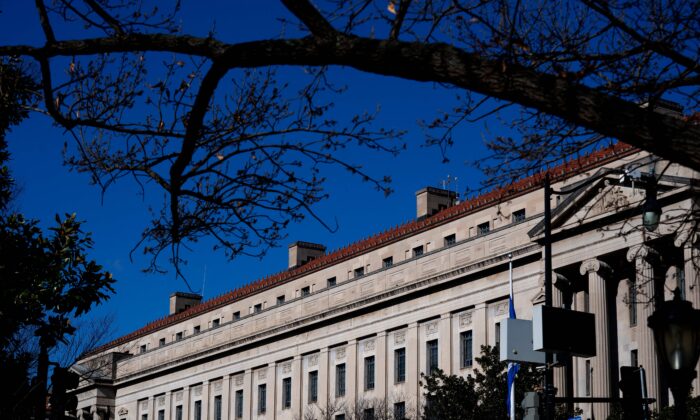 The Department of Justice in Washington on Feb. 5, 2022. (Stefani Reynolds/AFP via Getty Images)
Democrats

A former U.S. congressman from California has been charged with more than two dozen federal counts that include money laundering, wire fraud, and campaign fraud, the Justice Department (DOJ) said in an Aug. 16 statement.

Cox, 59, a Democrat from Fresno, represented California’s 21st Congressional District in the U.S. House of Representatives from 2019 to 2021.

He allegedly “perpetrated multiple fraud schemes targeting companies he was affiliated with and their clients and vendors,” the DOJ said in the statement.

Specifically, Cox created unauthorized, unrecorded bank accounts and used a series of “false representations, pretenses, and promises” to divert clients’ money into those accounts, prosecutors said. In the five-year period between 2013 and 2018, he allegedly used that method to obtain more than $1.7 million in client money and company loans and investment.

Further, Cox allegedly “received mortgage loan funds from a lender for a property purchase by submitting multiple false representations to the lender, including fabricated bank statements and false statements that Cox intended to live in the property as his primary residence,” the DOJ said.

However, this was a misrepresentation by Cox, who intended, in fact, to rent out the purchased home, prosecutors wrote.

Other charges involve a scheme by which Cox fraudulently obtained a $1.5 million construction loan to develop Granite Park in Fresno, California. The loan was diverted to a nonprofit run by Cox and a business partner, although the organization on its own couldn’t qualify without a financially viable guarantor.

To get around that, Cox allegedly promised that one of his affiliated companies would guarantee the loan, the DOJ said. To make the transaction look legitimate, Cox presented a false board representation suggesting that the board of directors of the guarantor company had agreed to back the loan.

In fact, the DOJ statement says that no such meeting ever took place and no owners of the company in question agreed to back the loan, which later went into a default that caused a loss of more than $1.28 million.

While running for the U.S. House in 2018, Cox reportedly devised a plan to fund or reimburse family members and business associates for donations to his campaign, prosecutors said. These illegal straw donations added up to a total of $25,000.

If convicted, Cox could face a maximum statutory penalty of up to 20 years in prison and a $250,000 fine for the wire fraud and money laundering charges.

Cox couldn’t be reached by The Epoch Times for comment on the charges.