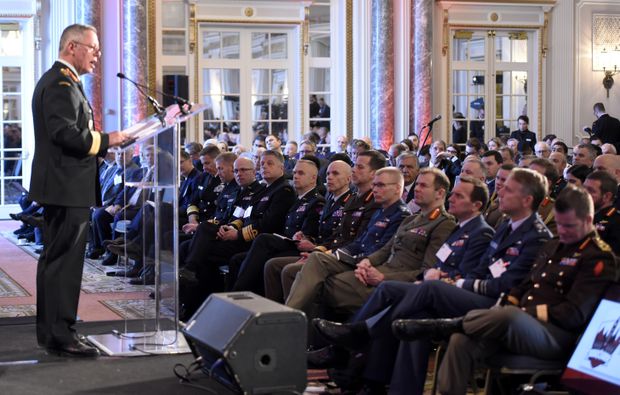 Senior members of the Canadian Forces sitting in the front row listen as Chief of the Defence Staff Jonathan Vance delivers remarks at the Ottawa Conference on Security and Defence in Ottawa on March 4, 2020. (The Canadian Press/Justin Tang)
Canada

Military police charged the former Canadian Armed Forces commander, who was not present but represented by a lawyer at the hearing, with one count of obstruction of justice in July.

The Canadian Forces National Investigation Service alleged in court documents that Vance repeatedly contacted a woman identified as “K.B.” in early February and “tried to persuade her to make false statements about their past relationship” to military investigators.

Maj. Kellie Brennan told a parliamentary committee in April that she and Vance had an inappropriate relationship that started in 2001 and continued after he became chief of the defence staff in 2015.

Crown attorney Tim Radcliffe indicated during this morning’s hearing that the charge against Vance would be dealt with as a summary rather than an indictable offence.

Lawyer Rory Fowler, an expert on military law, says that means Vance will face a maximum of two years less a day in prison if convicted, rather than up to 10 years if the case were an indictable offence.

Global News, which first reported the allegations made by Brennan in February, has also reported that Vance allegedly sent a lewd email to a much more junior member in 2012.

Vance has declined requests for comment from The Canadian Press, but Global has reported he denies any wrongdoing. None of the allegations have been proven in court.