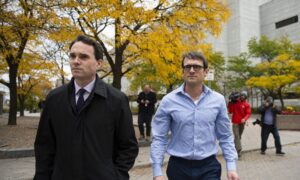 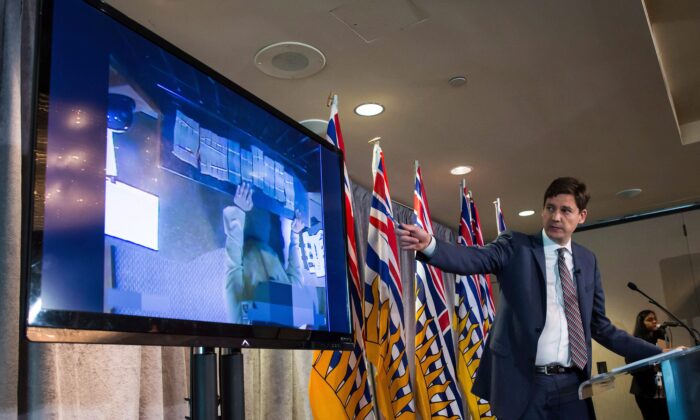 B.C. Attorney General David Eby gestures toward a screen showing bundles of cash an individual brought to a casino, after releasing an independent review of anti-money laundering practices during a news conference in Vancouver on June 27, 2018. (The Canadian Press/Darryl Dyck)
Canada

For the first time since it began just over a year ago, the ongoing inquiry into money laundering in British Columbia is adding former and current cabinet ministers to its witness list—11 in all.

Among current NDP ministers scheduled to testify are Attorney General David Eby, assistant deputy minister responsible for B.C. gambling Sam MacLeod, and deputy minister to the premier Lori Wanamaker, according to the commission’s website. Former Liberals include Christy Clark, who was premier from 2011 to 2017, and cabinet ministers Rich Coleman, Mike de Jong, and Kash Heed.

The former and current ministers are scheduled to testify during the hearing block that runs from April 19 to 30.

The final report of the Cullen Commission was originally scheduled to be released on May 15, but that has been extended to Dec. 15.

According to a March 19 statement by the commission, the extension was primarily due to the pandemic necessitating the hearings to be shifted online, as well as delays caused by challenges in gathering documents and the broad scope of the issues being investigated.

In his interim report, released publicly last December, Commissioner Austin Cullen criticized federal agencies for being slow to comply with his requests for documents and information, or providing documents that “have been redacted to the point that they provide no meaningful information.”

B.C Premier John Horgan initiated the commission in the wake of multiple reports on money laundering in the province. The reports outlined how hundreds of millions of dollars in illegal cash transactions affected B.C.’s real estate, luxury vehicle, and gaming sectors, with some of it laundered through B.C casinos.

German highlighted how the city’s desirability for money laundering has made it a hot spot for Chinese organized crime, in what has been called the “Vancouver Model” by Australian professor John Langdale. This system avoids conventional means of money transfer through the use of underground networks to settle financial accounts. The successful avoidance of provincial and federal taxes in the sale and export of luxury cars to China alone has resulted in the loss of tens of millions in provincial revenue.

The effects of this complex system of money laundering have also been devastating on a societal level. The Cullen Commission has already discussed how money laundering in real estate has distorted markets in such a manner as to contribute to housing unaffordability, making Vancouver housing the least affordable in Canada and among the least affordable internationally. The servicing of drug trafficking organizations through the laundering of illicit proceeds has also exacerbated the fentanyl crisis, which has been especially disastrous for Vancouver’s Downtown Eastside area.

But dirty money is not only an issue in B.C. A 2017 investigative report by the Toronto Star and CBC-Radio Canada highlights how Mossack Fonseca, the law firm behind the massive Panama Papers leak of 11.5 million documents detailing global tax avoidance and evasion, marketed Canada as a tax haven and has even established shell companies in the country for purposes of tax evasion.

In his interim report, Cullen described money laundering as “a crime that strikes at the heart of our collective values and corrupts the fabric of a free and democratic society.”