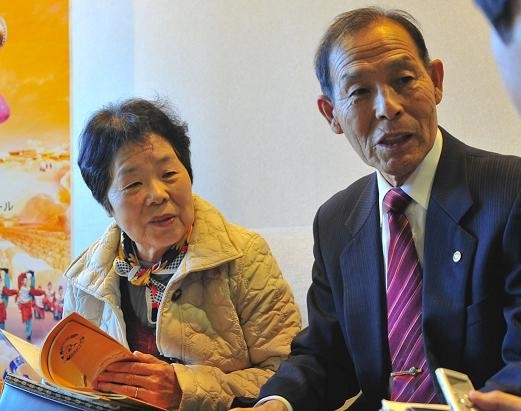 NAGOYA, Japan—A former councilor of Inazawa City, Aichi Prefecture, Mr. Minoru Sengoku, and his wife, were in attendance at the performance of Shen Yun Performing Arts New York Company at the Nagoya Congress Center on Friday afternoon, Feb. 17. Mr. Sengoku said Chinese and Japanese cultures have a close relationship in history, like the Japanese Buddhism, which originated from China. “Shen Yun showcases the broad and profound culture of ancient China,” he said.

“After seeing Shen Yun today, I deeply feel the broadness and profundity of Chinese history for thousands of years.” Mr. Sengoku said that he understood the lyrics sung by the vocalists through the English translation. “The songs were really fabulous with the vocalists’ wonderful voices. I had tried to imagine the performance when reading the program booklet before the show, but the actual performance was far beyond my expectation. It was really fantastic,” he said.

Mr. and Mrs. Sengoku were impressed by the vivid, animated backdrops that complement and synchronize all aspects of the performance. They said it was wonderful to see the goddesses and Buddha descend from the heaven, and then appear on stage; and then, these characters seem to fly into the backdrop and soar up to the sky. They said the backdrops also helped them to understand the stories more easily.

Mr. Sengoku particularly enjoyed the Taiwanese Amei dance, In the Mountains. He has been to Taiwan many times and he said the piece really captured the essence of the Amei dance. It was the best that he had ever seen, he said.

According to the program booklet, the Amei ethnicity is one of Taiwan’s indigenous peoples. In this piece, dancers in elaborate headdresses hold hands and step in rhythm as they shift effortlessly between formations. Amei dance, like its people, emphasizes teamwork, coordination, and community.