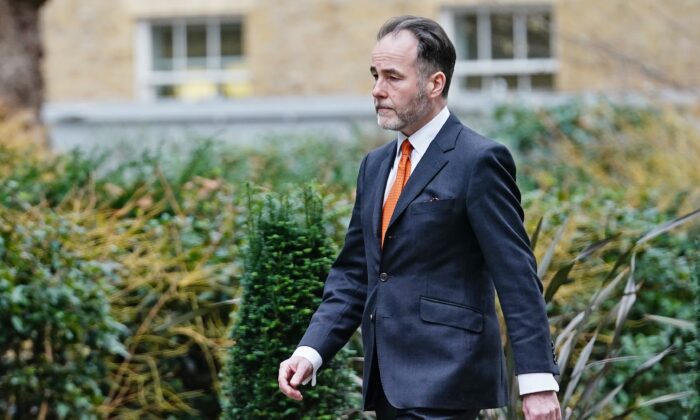 Chris Pincher, then minister of state in the Department for Levelling Up, Housing and Communities, pictured in Downing Street, London, on Feb. 8, 2022. (Aaron Chown /PA Media)
UK

A British MP who resigned as the Conservative Party’s deputy chief whip and had his party membership suspended over groping allegations said on Saturday that he is now seeking “professional medical support.”

Christopher Pincher, MP for Tamworth, resigned from the whips office on Thursday after The Sun reported that he had “groped” two male guests at the Carlton Club, a Conservative Party private members’ club in London’s Piccadilly, on Wednesday evening.

In his resignation letter to Prime Minister Boris Johnson, Pincher apologised for his behaviour, saying he had drunk “far too much.”

The Conservative Party on Friday suspended his party membership on Friday following a formal complaint.

In a statement issued on Saturday, Pincher said he would “cooperate fully” with the inquiry, and that he’s seeking “professional medical support” over stresses.

“I respect the prime minister’s decision to suspend the whip whilst an inquiry is underway, and I will cooperate fully with it,” the MP said.

Pincher said he’s “truly sorry” for the “upset” he had caused by drinking far too much and embarrassing himself and others.

“The stresses of the last few days, coming on top of those over the last several months, have made me accept that I will benefit from professional medical support,” he said, adding that he’s “in the process” of seeking the help.

“I hope to be able to return to my constituency duties as soon as possible,” the statement reads.

Johnson waited until hearing a formal complaint against Pincher before suspending the MP, according to a spokeswoman for Conservative chief whip Chris Heaton-Harris.

Announcing the suspension on Friday, the spokeswoman said: “Having heard that a formal complaint has been made to the ICGS [The Independent Complaints and Grievance Scheme], the PM has agreed with the chief whip that the whip should be suspended from Chris Pincher while the investigation is ongoing.”

She said the whips office “will not pre-judge that investigation,” and urged MPs and the media to “respect that process.”

But the main opposition Labour Party accused Johnson of dragging his feet.

Deputy leader Angela Rayner said the prime minister had “been dragged kicking and screaming into taking any action at all.”

“He just can’t be trusted to do the right thing. This whole scandal is yet more evidence of his appalling judgment,” Rayner said, adding that Conservative MPs should remove the prime minister.

Pincher previously resigned as a junior whip in November 2017 following a complaint that he made an unwanted pass at the former Olympic rower and Conservative candidate Alex Story.

Having referred himself to both the police and the Conservative Party complaints procedure, he was brought back by Theresa May as deputy chief whip in January 2018.

When Johnson became prime minister in July 2019, he was moved to the Foreign Office as minister for Europe and the Americas before returning to the whips office for a third time in February 2022 to shore up support for the prime minister amid growing unrest among Tory MPs over the “partygate” scandal.

Commenting on why Johnson appointed Pinch in February, a spokesman for Downing Street told reporters on Friday that he was “not aware of the prime minister being aware” of specific allegations against Pincher before appointing him.

The spokesman said it would not have been appropriate for Johnson to block Pincher’s appointment “on the basis of unsubstantiated allegations” without “any formal complaints” against him.