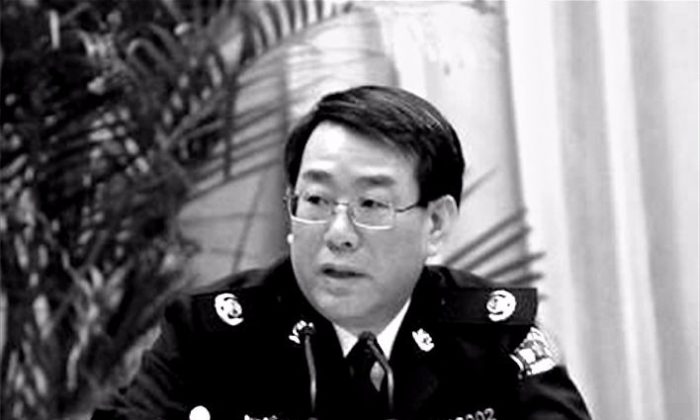 Liu Jingming, a procurement officer at the Qiqihar Hospital of Traditional Medicine, was well-liked by his colleagues and considered a “model worker” by his superiors: he was incorruptible and full of cheer, and on one occasion used his own paycheck to fix the hospital’s water faucets.

In February 2007, Liu was arrested for his beliefs and tortured to death. He was 39 years old, and died only 46 days after being detained. His family saw bruises and cuts across his swollen face, and a two inch hole in his right thigh, above a broken knee. Liu was a practitioner of Falun Gong, a traditional Chinese practice of meditation that was targeted for persecution in 1999.

Now, one of the officials responsible for the death of Liu has been purged from the system he thrived in for so long.

Yang Huanning, the chief of the Chinese Communist Party’s security committee in Heilongjiang Province from 2005 to 2008, was removed from office on Aug. 22 and put under investigation for corruption and “violations of Party discipline.” At the time he was purged he was in Beijing as the director of the State Administration of Work Safety.

Yang, 60, had spent 32 years in the Communist Party’s fearsome public security system, and was one of the officials eager to accumulate political capital by lashing out at Falun Gong, under the orders of former Party leader Jiang Zemin in 1999.

Heilongjiang, an industrial province in China’s northeast, was the epicenter of the Party’s anti-Falun Gong campaign.

Falun Gong is a spiritual discipline that espouses the teachings of truthfulness, compassion, and tolerance and includes five slow-moving exercises. Liu took up the practice in 1995, becoming one of the between 70 and 100 million Chinese to adopt the practice in the 1990s, according to estimates from official and Falun Gong sources.

The anti-Falun Gong campaign that erupted in July of 1999 was an opportunity for many officials to profit from the budgets allocated toward it, and to gain promotions on the back of violent persecution.

Yang worked closely with then-security chief Zhou Yongkang, who played a key role in carrying out Jiang’s persecution orders. Zhou was purged in 2014.

Yang worked under Zhou as the vice director at Ministry of Public Security—the regime security apparatus that Zhou headed—from 2001 to 2005. In April 2008, Yang was transferred to Beijing as the ministry’s second-in-command, overseeing security work during the Olympics. Yang reportedly observed the day-to-day operations so closely that he even looked at the menu in each canteen, Gao Guangjun, a New York-based lawyer and a classmate of Yang in college, told the overseas Chinese-language media Mingjing.

During a national teleconference on political and legal work in 2009, Yang called on party officials to “be on strict guard, crack down ruthlessly,” and marked the persecution of Falun Gong as one of their six key tasks, according to the state-run Legal Daily. At the time Yang was head of the State Office for Social Stability Maintenance, one of the security organs charged with carrying out the persecution.

Liu Jingming, the hospital procurement officer, was not the only Falun Gong practitioner to be killed under the reign of Yang Huanning in northern China. Minghui, a clearinghouse that collects first hand accounts of persecution, also documents the case of Xu Hongmei, 37, and Shen Zili, 49, two friends from the city of Qiqihar. They were arrested on Jan. 13, 2007, and both died of brutal beatings around a month later.

Their family members were allowed to see them unconscious, just before they died, describing them as emaciated and swollen, according to Minghui. The police demanded the families to pay 20,000 yuan before discharging them. The family refused to pay the exorbitant charge — equivalent to over a year’s annual income — and the police said they’d rather see the practitioners die there than set them free.

Minghui reports that 4,126 practitioners have been confirmed to have died from torture or beatings in custody over the past 18 years. In Heilongjiang, at least 537 practitioners are confirmed to have died from torture, forced labor, or detention, according to Minghui’s documentation. The real figures are likely much higher. It is unclear how many of these deaths Yang is directly responsible for.

Yang was transferred to head the State Administration of Work Safety in October 2015, four months after Zhou was purged for corruption in 2015.

Mainland Chinese media have speculated on Yang’s downfall since July, when his official biography suddenly vanished from the Administration of Work Safety’s website, following three months of his disappearance from public view. Within a few days, he was placed under investigation, demoted to non-leadership positions, and stripped of title as a delegate to the Party’s 18th National Congress. The formal announcement of his investigation shortly followed.