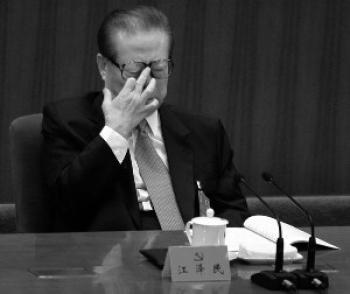 Former Chinese regime leader Jiang Zemin was admitted to the Huadong Hospital in Shanghai after a heart attack, according to the latest issue of Open Magazine. The magazine quoted a source saying Jiang dared not go to hospitals in Beijing to avoid possible control by his political opponents.

The August issue of the political magazine reported that even though the former leader still holds control over the army, he does not trust the No. 301 Hospital in Beijing, a military affiliated hospital that only services high-ranking cadres.

“They received the information from a reliable source, and it can be confirmed that Jiang has been admitted to the [Huadong] Hospital," Mr. Jin Zhong, editor-in-chief of Open Magazine told The Epoch Times.

Mr. Jin believes the choice of hospital signifies an apparently intensified power struggle between the two factions led by current regime leader, Hu Jintao, and Jiang respectively, “Our source disclosed he chose a hospital in Shanghai, because he cannot trust the No. 301 Hospital.”

The now 82-year-old Jiang was Shanghai party chief prior to the Tiananmen Square Massacre in 1989. Jiang was a strong supporter of the decision to violently crackdown on the student movement, and enforced similar martial-law style policies in Shanghai. In the same year Jiang also closed down the renowned reformist media, the World Economic Herald, the only nongovernment owned newspaper in China at the time.

His tough stand gained him favor from former regime leader Deng Xiaoping, and Jiang became his chosen successor. Jiang stepped down in 2002.

Jiang is perhaps most infamous for initiating and driving the persecution of the Falun Gong spiritual practice, a campaign which began in July of 1999.

Falun Gong is a traditional Chinese qigong-style practice with exercises and moral teachings. Introduced to the public in 1992, the discipline had gained tens of millions of adherents by 1998. Analysts regard its increasing influence in Chinese society as one of the main causes for the Communist Party’s repression, which was led by Jiang Zemin at the time.

“Communist Party sources said that the standing committee of the Politburo did not unanimously endorse the crackdown and that President Jiang Zemin alone decided that Falun Gong must be eliminated,” The Washington Post reported in November of 1999.

Willy Lam, writing for CNN, quoted a Party veteran as saying, "By unleashing a Mao-style movement, Jiang is forcing senior cadres to pledge allegiance to his line," and that the campaign "will boost Jiang's authority—and may give him enough momentum to enable him to dictate events at the pivotal 16th Communist Party congress next year [2000]."

In past years, news about Jiang’s deteriorating health was welcomed by Chinese bloggers, who widely criticize his leadership. He was ill during the 17th Party Congress in 2007 and again in hospital for facial paralysis during the Chinese National Congress session in 2008.

Renowned Shanghai rights lawyer Zheng Enchong believes Jiang’s choice of hospital is a signal of another round of power struggles within the Chinese Communist Party.