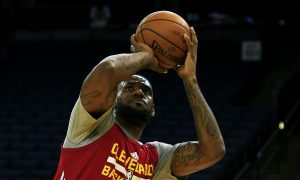 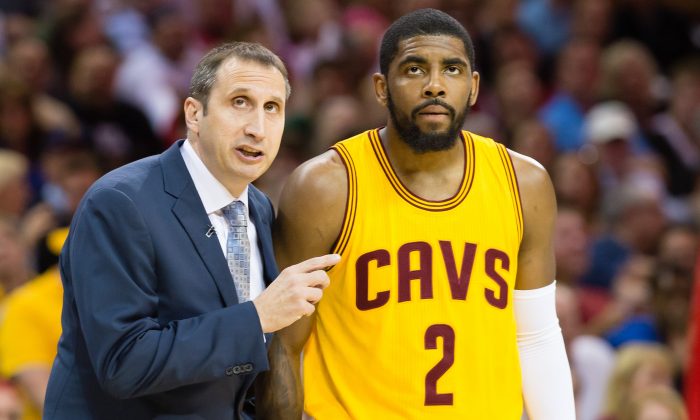 Head coach David Blatt (L) of the Cleveland Cavaliers has the team in the NBA Finals despite the loss of stars Kyrie Irving (R) and Kevin Love. (Jason Miller/Getty Images)
NBA

When the Cleveland Cavaliers hired David Blatt last summer, it was met with general apathy around the country.

Yet halfway around the world, the people he had worked with—especially with Maccabi Tel Aviv—knew that Cleveland had just made a great hire.

“I always thought his resume was perfect,” said Yaron Talpaz, who is Maccabi Tel Avi’s head of U.S. National Operations and has known Blatt for 15 years. “With the way the NBA has gone international now you’re talking about someone who has everything.”

Blatt, who was born in 1959 in Framingham, MA played for the legendary Pete Carril at Princeton from 1977-81. He then played professionally overseas until 1993, when his coaching career began with Galil Elyon (in Israel).

After being an assistant and a head coach for the better part of 10 years in Israel, Blatt moved on to coach the Russian club Dynamo St. Petersburg in 2004-05 and was immediately voted Russia Super League coach of the year.

The next year as coach of Benetton Treviso, in Italy, he won the Italian Championship. He eventually came back to Maccabi Tel Aviv in 2010 and won the title in dramatic fashion in 2014, defeating Real Madrid in overtime with a roster that had significant turnover during the season and no player on the All-Euroleague First Team.

Talpaz also notes that one of Blatt’s biggest accomplishments was leading the Russian national team to the European championship in 2009 after beating Spain—in Spain. “That was the best generation of Spanish basketball,” says Talpaz. “Pau [Gasol] was at the top of his game, Rudy Fernandez was in the NBA. So I’m not surprised with the success.”

But does any of that international experience really help in the NBA?

“The Euroleague is actually the most-closest basketball to the NBA—it’s much closer to the NBA than the college game,” says Talpaz, who also was a broadcaster at at The Sports Channel—Israel’s version of ESPN—where Blatt was a frequent host analyst.

“The rules are more similar,” says Talpaz, noting the identical 24-second shot clock that the Euroleague employs—as opposed to the NCAA’s 35-second (soon to be 30-second) clock.

“Because the rules are more similar, the pace is,” says Talpaz, who also notes how many Euroleague teams now have a number of former NBA players. “In all the top ten teams in Europe, they’ll have between 3-7 players that are somehow connected to the NBA.

“So you know, it’s very similar to the NBA.”

Blatt, who was fortunate enough to have LeBron James sign with Cleveland less than a month after he took the Cavaliers job, has had to deal with season ending injuries to stars Kevin Love and Kyrie Irving, yet still has Cleveland in the Finals, just two wins from an unlikely title.

How has he done it?

Although Blatt was perceived to be an offensive innovator, it’s his work on the other side of the court that Talpaz says is his real strength. “David is actually a defensive guy first,” says Talpaz. “I’m not surprised to see their defense being so good.”

Unsung players like Matthew Dellavedova, Tristan Thompson, and Timofey Mozgov have stepped for the Cavs. Oh and LeBron has been pretty good as well, averaging 36.6 points, 12.4 rebounds, and 8.8 assists per game in the Finals.

Individual player development is another of Blatt’s strengths.

“He’s not credited enough for the development and the play of guys like Dellavedova and Tristan Thompson and Mozgov,” says Talpaz.

So whether or not Cleveland wins the title this year, they’ve at least found a number of role players and a coach perfectly suited to lead them.