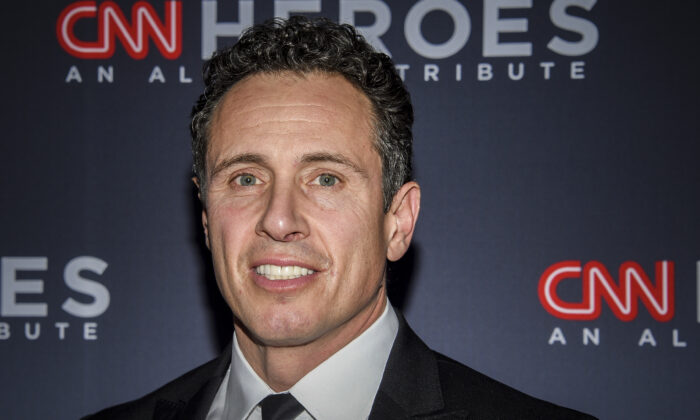 Former CNN anchor Chris Cuomo is joining a rival network called NewsNation, he and the company announced on July 26.

Cuomo, who was fired by CNN in December 2021, will get his own prime-time show.

“NewsNation has earned high-praise from multiple media watchdog groups by remaining true to its mission to bring viewers the fact-based news that impacts their lives without opinion or bias,” Sean Compton, Nexstar Media Inc.’s president of networks, said in a statement. “Chris joins our growing team of seasoned, award-winning journalists and will further our efforts to continue to ensure fairness and transparency in our news reporting and talk shows.”

Cuomo said that he will be “covering news wherever it happens and having conversations that cater to common concerns and solutions rather than political parties or the political circus.”

Nexstar owns a number of media properties, including NewsNation and The Hill.

NewsNation is a rebrand of WGN America. The rebrand took place in 2021.

Before the probe, Cuomo claimed he had not contacted colleagues in the media world about the allegations. But the investigation showed he tapped sources, including some inside rival outlets, to try to figure out whether more women were coming forward against his brother.

It also found that Cuomo repeatedly messaged with members of his brother’s team as they tried to determine how to respond to the allegations.

Rebecca Aguilar, the president of the Society of Professional Journalists (SPJ), told The Epoch Times in an email at the time that Cuomo’s actions were not ethical and went against the SPJ’s Code of Ethics.

“It is unethical for a journalist to use their position, contacts, and influence to help a family member or friend involved in an investigation by law enforcement,” she said.

A lawyer later said that Cuomo’s termination also stemmed from an allegation of sexual misconduct, which Cuomo has denied.

CNN head Jeff Zucker, who Cuomo said knew about his involvement in defending his brother, resigned earlier this year, as did Zucker’s paramour Allison Gollust.

During an appearance on NewsNation on Tuesday night—his first interview since being fired—Cuomo said he took the actions he did because he was concerned about his sibling.

“In the moment of it, I was so worried about my brother, and what this would mean for my family, how it reflects on my father, and his legacy, that I didn’t really see what was coming my way,” Cuomo said.

“It has been very difficult and it made me rethink things that I haven’t really touched in years—years and years—about myself, about why I’m here, about what I’m supposed to be doing and not doing. I’m telling you. You keep using the word heavy, but it’s heavy. It’s heavy, and it’s not something I would want people to go through. But you got to take what life brings out you. That’s what I’m doing,” he added later.

Cuomo said he did not regret interviewing his brother on his CNN show, a move that drew criticism from across the media spectrum. He also doubled down on the false claim that he did not contact the press about his brother’s situation.

“I never contacted any media who were covering my brother to try to affect their coverage. I talk to people in the media all the time, but most of the people in my life—” he said, before host Dan Abrams noted that’s not what he claimed.

“I think the distinction has a meaningful difference. The concern would be not that I called you and said, ‘what do you think’s going on here?’ It’s me calling you and saying, ‘Hey, tonight, we’re going to segment I hope you remember different that is different.’ That’s what I meant. And that’s what matters,” Cuomo said. “The idea that I never spoke to anybody in the media about my brother. It’s an impossibility. Most of my friends are in the media,” he also said.