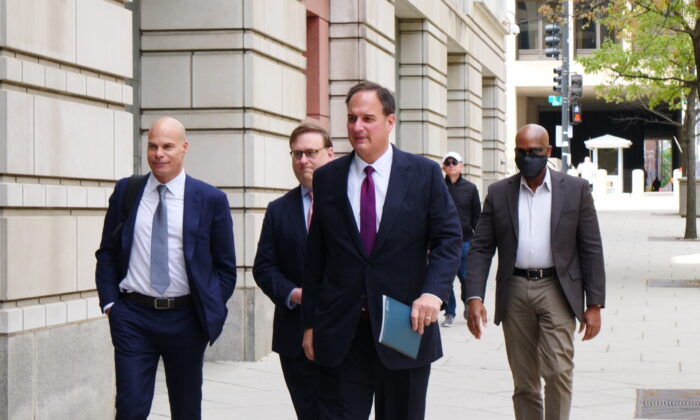 A former Hillary Clinton campaign attorney set to go on trial for allegedly lying to the FBI revealed just days before jury selection was to start that notes from a top former FBI official undercut the case against him.

Attorney Michael Sussmann allegedly told James Baker, an FBI attorney, in 2016 that he was bringing allegations concerning then-presidential candidate Donald Trump to the agency on his own accord, not on behalf of a client.

Special counsel John Durham, prosecuting the case, revealed in April that Sussmann told Baker as much in a text before they met.

“Jim—it’s Michael Sussmann. I have something time-sensitive (and sensitive) I need to discuss,” Sussmann told Baker. “Do you have availibilty [sic] for a short meeting tomorrow? I’m coming on my own—not on behalf of a client or company—want to help the Bureau. Thanks.”

Sussmann’s attorneys have since said the message was legitimate, but in a new filing on May 8, they shared new information they said contradicted Durham’s core allegation. They only recently obtained the information through discovery from prosecutors.

The key piece of new information is in a set of notes said to have been taken during a meeting in March 2017 that included Baker and top Department of Justice officials, as well as then-FBI Deputy Director Andrew McCabe.

The notes state that McCabe said that the Trump–Russia allegations were sourced from an “attorney” who “brought [them] to [the] FBI on behalf of his client.”

“This new information directly contradicts the special counsel’s core allegation in this case: that Mr. Sussmann falsely told Mr. Baker that he was not meeting with Mr. Baker on behalf of any client,” Sussmann’s attorneys said.

The previously revealed text “represents just one moment in time,” they said before noting that the actual meeting between Sussmann and Baker wasn’t recorded, nor were several phone calls held after the meeting.

“And yet, at some point between September 18, 2016, and March 6, 2017, the FBI apparently came to believe that Mr. Sussmann did have a client in connection with his meeting with Mr. Baker and that the Alfa allegations were provided ‘on behalf of his client,'” Sussmann’s attorneys said.

Sussmann represented the campaign of Clinton, Trump’s opponent for the presidency in 2016, when he met with the FBI attorney. He was later charged with one count of lying to the FBI.

Durham’s team is attempting to convince the court to block the defense from introducing the notes, saying the judge should make them give a “non-hearsay basis” for each portion they want to admit.

Prosecutors said in a recent filing that the Department of Justice workers who took the notes weren’t present for the Baker–Sussmann meeting and that the government hasn’t found any notes that Baker took during the 2017 meeting that involved McCabe.

McCabe was fired during the Trump administration after he lied under oath, according to the department.