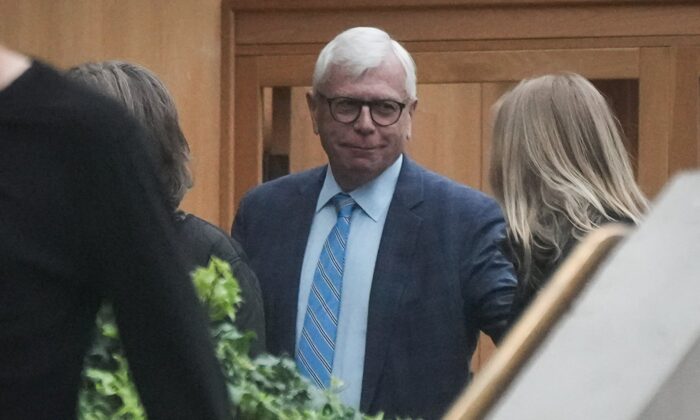 The man who was once the senior officer of the B.C. legislature has been sentenced to three months of house arrest for breaching the public trust when he purchased a new suit and shirts as work attire.

Craig James, 71, the former clerk of the B.C. legislative assembly, has been sentenced to three months’ imprisonment but to be served in his home.

The sentence delivered in B.C. Supreme Court Friday marked the end of a four-year scandal that began with dramatic accusations of misspending against James by then-Speaker Darryl Plecas, involved multiple investigations and culminated in a criminal trial in which most charges were dismissed.

B.C. Supreme Court Associate Chief Justice Heather Holmes said because of the nature of the offence, a conditional discharge would be contrary to the public interest.

As clerk of the legislature, he held the highest level of responsibility apart from the Speaker, who’s an elected official, she noted.

“Mr. James’s offence breached the public trust at its very heart,” she said.

James will be under 24-hour house arrest for the first month, and for the remainder of the term, he will be under curfew between 9 p.m. and 6 a.m.

He has also been ordered to pay restitution of $1886.72, the cost of the clothing he claimed.

The Crown had asked for a jail term of up to a year, while the defence wanted James to be given 12 months’ probation and a conditional sentence.

Holmes said a conditional discharge would be contrary to the public interest, given the circumstances of the case, even taking into account the “collateral consequences” that James has suffered.

His defence lawyer, Gavin Cameron, told the sentencing hearing on Monday that the stigma of media coverage was enough to denounce James’s behaviour and deter others from future offences.

Holmes said stigma of “sometimes scathing” media coverage was a factor in sentencing, and noted it affected his work prospects, emotional well-being and family.

“However, in my view, public criticism and blame through the media cannot entirely displace the court’s role in denouncing conduct and deterring others through the sentence it imposes.”

Holmes said mitigating factors in sentencing include the small dollar value of the offence and that James was “seen as having an unquestionably good character.”

He’s well regarded by public figures who worked with him and they continued to view him in that way in letters of support submitted by senior members of the legislature and former premier Gordon Campbell, she said.

James was found guilty of fraud and breach of trust, but the charges were related to the same evidence, so the judge entered a stay on the fraud count.

In May, Holmes found James not guilty on three other counts, including one related to a $258,000 retirement benefit.

During his house arrest, he will be permitted to leave for a two-hour period once a week to grocery shop, go to church and go to medical appointments for himself or his family members.