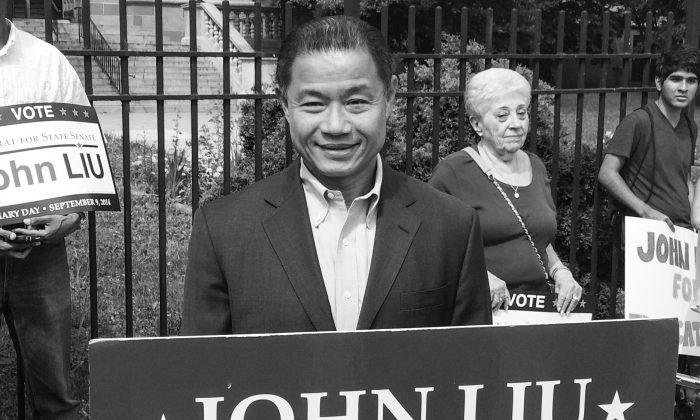 NEW YORK—John Liu is running for office again, this time for state senate in New York’s 11th district. He will face 20-year political incumbent Tony Avella in the Democratic primary.

At a campaign stop at Bayside High School last Friday, John Liu unveiled a plan for sweeping education reforms with the confidence of a political star on the ascent, a tone at odds with his campaign procedures.

Before John Liu fielded questions, a staffer asked each reporter to identify their name and organization, a rarity on other campaign trails, but unsurprising in light of John Liu’s scandal-laden history in politics.

The ex-comptroller was likely exercising caution so as not to be caught off-guard by any inquiries about the campaign finance fraud in his 2013 mayoral campaign, or his ties to the Chinese Communist Party.

Preferring to pontificate on vague reforms in the distant future, John Liu handed out outlines about providing private “biometric records” of children to parents and drawing districts based on birth-rate data to reduce school-overcrowding.

Making bold promises is an old habit of his. During John Liu’s 2013 mayoral run, he once told a crowd in Harlem that he would raise the minimum wage from $7.25 to $11.50, an impossible proposal since courts ruled in the 1960s that only the state can set the minimum wage.

John Liu’s portentous rhetoric was thrown into sharp relief by the paucity of campaign coverage by the press, which has left him for dead after his failed mayoral run. Only two English-language outlets, The Western Queens Gazette and Epoch Times, were at Bayside High on Friday morning.

The reputation of the state Senate-hopeful suffered a fatal blow last May, when years of allegations about fraud in his campaign fundraising were confirmed. Two of his top campaign aides were convicted in federal courts of attempted wire fraud in a straw donor scheme to raise money for John Liu.

They were caught after an undercover FBI agent offered to illegally funnel money into the John Liu campaign, and videotaped his interactions with John Liu’s campaign treasurer Jenny Hou and aide Oliver Pan, who were suspected of conspiring to distribute the cash to straw donors.

John Liu’s aides had recruited straw donors to illegally obtain matching funds from the city’s Campaign Finance Board (CFB), which gives candidates $6 for every $1 of individual donations up to $175.

Straw donors have their contributions given back to them by a third party, allowing the campaign to illicitly obtain more matching funds.

Discrepancies in John Liu’s campaign fundraising were first reported in late 2009 by the Epoch Times, which found missing information in John Liu’s disclosure reports and inflated donation figures—one donor, listed as donating $1,000, said he only donated $50.

After John Liu raised more than $1 million in the first 6 months of 2011, the New York Times interviewed nearly a hundred contributors to the John Liu campaign and found similar inconsistencies.

The CFB eventually commissioned Thacher Associates LLC to investigate the John Liu campaign, which resulted in a 105-page report that documented many John Liu donors who were told by their employers to give $800 to the campaign on the promise of full reimbursement afterwards.

Many of the $800 donors listed in the report were immigrants who knew little English and could not identify which office John Liu was running for. These included supermarket cashiers and clerks whose contributions exceeded their monthly rent.

In the face of mounting evidence from federal prosecutors and Thacher Associates, the CFB voted to deny John Liu matching public funds for his mayoral campaign, five weeks before the Democratic Primary.

“The candidate is ultimately responsible for the campaign’s compliance with the law,” said CFB Chair Joseph Parkes in a statement about the decision. “The evidence suggests that the potential violations are serious and pervasive across the campaign’s fundraising.”

Nonetheless, John Liu himself has not been charged with any campaign finance fraud.

Bereft of the $3.5 million in matching funds, John Liu’s run was effectively over. He finished fourth in the primary, winning just under 7 percent of the votes.

John Liu has filed a federal lawsuit against the CFB, denied wrongdoing throughout the affair, and has stood by his treasurer Jenny Hou even after she was given a 10-month sentence for the straw donor scheme.

Defending Hou may appear to be a politically amateurish move at first blush, but sensible in the context of John Liu’s connections with the Chinese Communist Party.

Jenny Hou’s father is Hou Jianli, president of the Beijing Township Association. Township associations play a quasi-governmental role in many overseas Chinese communities, making them a target that Beijing tries to bring under its influence.

The Chinese regime has offices working to infiltrate these associations, the Overseas Chinese Affairs Office, and the United Front Work Department.

Along with Jenny’s father Hou Jian Li, John Liu met personally with Xu Yousheng, the vice president of the Overseas Chinese Affairs Office, in Beijing in 2007. On that trip John Liu was given the “Grand Award to Chinese that influence the world,” an award that had never been given to a Chinese from New York before.

Another one of John Liu’s allies is Chen Shanzhuang, chairman of the Fuzhou Lang Qi United Association. Chen had organized having 10 buses of people support John Liu at City Hall after he announced his bid for mayor in 2013.

The same Chen Shanzhuang was reported by Chinese media outlets of having been the first person to raise the People’s Republic of China’s flag in New Jersey and Flushing.

In the spring and early summer of 2008, Flushing was convulsed by organized harassment of Falun Gong practitioners that sometimes turned violent.

John Liu repeatedly refused requests to meet with Falun Gong practitioners about the violence, but was known to meet with some of those the police charged with assault against the practitioners. The Chinese regime encourages opposition to Falun Gong.

Despite his scandal-plagued history, John Liu still harbors far-reaching political ambitions. After he lost the mayoral primary, he has kept making public appearances across the city to keep himself in the public eye.

During his campaign for state senate, he has repeatedly campaigned outside of the boundaries of his district, which hints at a future run for a citywide office. John Liu, whose platform is to the left of Tony Avella, has collected endorsements from numerous unions and the Working Families Party.

He’s raised over half a million dollars in the first half of this year, around four times that of his opponent. Since his campaign finance disclosures were filed in July, there have been no allegations of misconduct.