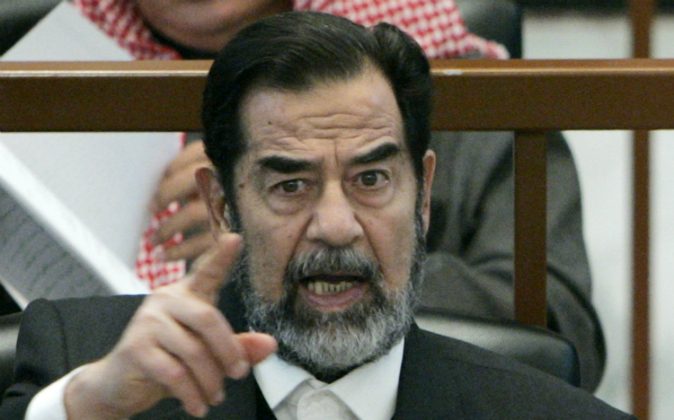 Former Iraqi President Saddam Hussein points while listening to the prosecution during his 'Anfal' genocide trial on December 21, 2006 in Baghdad, Iraq. Saddam and six co-defendants are being tried on charges of murdering Kurds during the 1987-88 'Anfal' campaign. Hussein allegedly kept a torture chamber at the Mission of Iraq located in New York City. (Nikola Solic-Pool/Getty Images)
Middle East

Former CIA Agent Says US ‘Got It so Wrong’ on Saddam Hussein, Iraq

John Nixon, who held a number of conversations with the dictator before his 2006 execution, said U.S. officials made grave errors in their Iraqi intervention, saying their view on Hussein’s attitude to using chemical weapons was incorrect. They were also mistaken on his health, habits, and how he ran Iraq.

Nixon, who wrote about his account in the Mail on Sunday, asked Hussein if he had thought about using weapons of mass destruction (WMDs) on U.S. troops in Saudi Arabia.

Hussein’s response was: “We never thought about using weapons of mass destruction. It was not discussed. Use chemical weapons against the world? Is there anyone with full faculties who would do this? Who would use these weapons when they had not been used against us?”

Nixon elaborated, saying his response wasn’t what “we had expected to hear.”

In 2003, in a famously controversial move, former President George W. Bush said the U.S. needed to invade Iraq because of the risk posed by WMDs. The U.K. government followed suit.

Hussein later warned Nixon about attempting to govern Iraq after he was deposed.

The former leader noted that Americans don’t understand Iraqis, their language, thinking, history, or even the country’s weather.

Nixon said President Bush had “blamed the agency for everything that went wrong and called its analysis ‘guesswork’ while hearing only what he wanted to hear.”

Hussein’s comments to Nixon appear to be somewhat prophetic, in hindsight, as Iraq descended into chaos after he was removed from power. The U.S. currently has 5,000 troops in the country—five years after President Barack Obama announced pulling troops from the country. The number of American forces recently increased in Iraq in anticipation of taking Mosul back from the ISIS terrorist group.