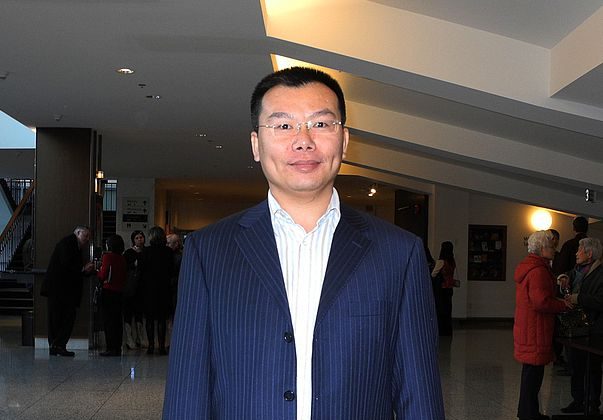 Mr. Qiu Mingwei attended the Saturday evening performance of Shen Yun at Queen Elizabeth Theatre and was filled with pride as he watched the rebirth of traditional Chinese culture being depicted onstage. (The Epoch Times)
News

VANCOUVER, Canada—Much like the characters in some of the legendary tales played out in the Shen Yun Performing Arts production, audience member Qiu Mingwei has faced a harrowing journey of his own in China.

As a former deputy director at China’s state-controlled newspaper, the People’s Daily, Mr. Qiu fled the country in 2009 to avoid persecution. His crime? Participating in a pro-democracy march in Hong Kong and advocating for human rights in China.

He attended the Saturday evening performance of Shen Yun at Queen Elizabeth Theatre and was filled with pride as he watched the rebirth of traditional Chinese culture being depicted onstage.

“Shen Yun is great,” he said through a translator.

Mr. Qiu has faced constant surveillance, pressure, and harassment from Chinese communist authorities since he fled the country.

He showed obvious pride for the work done by the Shen Yun artists to fulfill their mission of reviving traditional Chinese culture and to speak openly about suppression in China through the performing arts.

“Watching the show, I can see that the Shen Yun dancers have undergone arduous training. They really embody the [Chinese proverb] ‘One minute onstage, 10 years of practice.’ Their dances can only be deemed a success,” he said.

Traditional Chinese culture and art forms have been virtually destroyed under the Chinese Communist Party’s various violent campaigns in past decades, such as the Cultural Revolution.

Mr. Qiu was impressed with a dance called How the Monkey King Came to Be.

A character in the classic novel “Journey to the West,” the Monkey King goes on an epic journey with a band of colourful compatriots to seek sacred Buddhist scrolls. The novel is a pillar of traditional Chinese culture and embodies the divinely inspired culture that Shen Yun aims to revive.

“The presentation of the program ‘How the Monkey King Came to Be’ was very sincere, and in just a short dance, it gave the audience a glimpse of God-given Chinese culture,” said Mr. Qiu.

Another dance called Crazy Ji Saves the Day recounts the adventures of a quirky Buddhist monk, Ji Gong, who lived during the 12th century.

In the story, Monk Ji Gong outwits villains to save a young girl in his trademark creative and unconventional ways.

“It is a story that we have been familiar with since we were young,” said Mr. Qiu.

“I found this dance very intimate and nostalgic, humorous and zany. This dance was such an accomplishment.”

Mr. Qiu also appreciated Shen Yun’s colourful ethnic and folk dances, which give audiences a glimpse of the diverse ethnic groups that have existed in China for thousands of years.

He was particularly touched by the piece In the Mountains that displays the culture of Taiwan’s Amei indigenous people.

“This dance allowed us to see that [the Amei people] are extremely carefree, hopeful, and so naturally gentle,” he said.