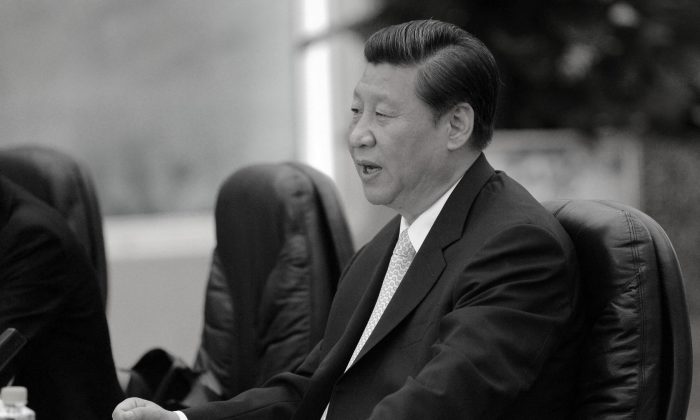 Chinese Communist Party leader Xi Jinping speaks during a meeting with Ethiopian Prime Minister Hailemariam Desalegn in the Great Hall of the People in Beijing on June 14, 2013. Xi appears to have engineered the weakening of power of former regime leader Jiang Zemin over the period since he took over as Party leader last November. (Goh Chai Hin/AFP/Getty Images)
China

The order in which the names of leaders of the Chinese Communist Party appear in official announcements is often a close proxy to their political heft. So when the name of Jiang Zemin failed to appear at all on a recent list of dignitaries that sent their respects upon the deaths of state-affiliated scholars, commentators could not help reading into its wider significance.

Especially when it came two days after the Ministry of Foreign Affairs published on its website an encomium, spoken by Jiang upon his meeting with Henry Kissinger, of the new Party leader Xi Jinping and his bold new policies.

“Xi Jinping is an extremely capable, wise leader,” Jiang was reported to have said. He praised Xi’s “resolute decision” on a recent security crackdown in Xinjiang, a region that periodically suffers ethnic violence, and his “extremely frank” meeting with President Obama in California in June.

Apparently, Xi didn’t repay the favor to Jiang. For the funeral of Sichuan Agricultural University professor Zhou Kaida on July 23, Xi Jinping and Hu Jintao, the former Party chief, as well as the current and former premiers, Li Keqiang and Wen Jiabao, were all represented. But no Jiang, who was the leader of the Chinese Communist Party before Hu Jintao.

On July 24, at the death of another Party academic, Wang Keming of the Chinese Academy of Sciences at Shandong University, Jiang’s name was also nowhere to be found.

That would not be so unusual if Jiang Zemin were not known to value so highly the prominence he is accorded in official announcements. His reign as Party chief, from 1989-2002, was marked by regular displays of bombast and publicity events, including a steady stream of “inscription” ceremonies, where Jiang would leave his words of wisdom, sometimes deriving from old communist dogma, scrawled on plaques to be hung prominently at Party-run facilities across China.

Jiang would also be pointedly named just behind Hu Jintao at virtually all major Party confabs prior to the 18th Party Congress, when Xi Jinping was installed as the new supreme leader. When the Olympics was held in China in 2008, Jiang positioned himself in the center of the leadership lineup, despite having no official post at that time and having been out of power for over four years.

Now, per a more orthodox protocol, Premier Li Keqiang is listed behind Xi Jinping, because he is the second in charge.

Jiang’s exclusion from recent funeral condolences, and the recent praise of Xi, are only two of the most recent signs that he is losing influence, almost certainly reluctantly. His contribution to the Chinese communist theoretical canon, called the “Three Represents,” was also left out of a May 27 Party Central ideological circular reinforcing the need to carry out political thought work on young educators. All other doctrines, from Karl Marx’s to Hu Jintao’s, were given a head-nod.

Ren Baiming, an analyst of Chinese current affairs based in the United States, said in an interview with New Tang Dynasty Television, a primarily-Chinese language broadcaster, that “Hu Jintao and Wen Jiabao have formed a strategic pact with Xi Jinping and Li Keqiang. They have a mutual understanding. This shows that Jiang’s influence has been deeply weakened.”

The changes can be tracked back to even November of 2012, when Jiang was listed behind Hu Jintao and Xi Jinping during the announcement of the death of Bishop Ding Guangxun.

Then in January of 2013 he appeared behind the whole new Standing Committee line-up, which had been determined at the 18th Party Congress in November of 2012.

Xing Tianxing, another commentator of Party affairs, told NTD Television that “The Party’s leadership’s rankings have always drawn attention, mainly because the Party’s mouthpiece media is tightly controlled by the Propaganda Department.” So, he says, it directly reflects the Party’s internal state of affairs, “its internal struggles and the balance of power.”

Outside the rarefied world of symbolic Party naming orders, there have been a raft of real-world shifts instituted by Xi that have weakened Jiang Zemin’s position.

Xi has, for instance, “parachuted” those in the camp of Hu Jintao into local posts across China, in what analysts believe was an attempt to weaken the networks of influence and patronage developed by Jiang Zemin over his over decade of power.

Most notably however was the change in the command structure of the security apparatus, instituted upon Xi’s rise to power late last year. Formerly, the Political and Legal Affairs Committee was under the control of cadres directly loyal to Jiang Zemin, and those men were perched in the Standing Committee of the Politburo of the Chinese Communist Party. The Standing Committee is a subset of the full politburo, currently comprising seven members, and wields the greatest power in China.

Under Xi Jinping, control of the PLAC was taken away from a Jiang loyalist, and the chief of the security apparatus was downgraded to being a member of the Politburo, rather than of the Standing Committee, which reinforces the level of control that the central leadership is able to exercise.

A number of officials associated with Jiang and his broad political network, including Liu Tienan, the former director of the National Energy Administration, Li Chuncheng, former deputy Party Secretary of Sichuan Province, and others, have also been taken down late last year and this year in what are ostensibly corruption probes.