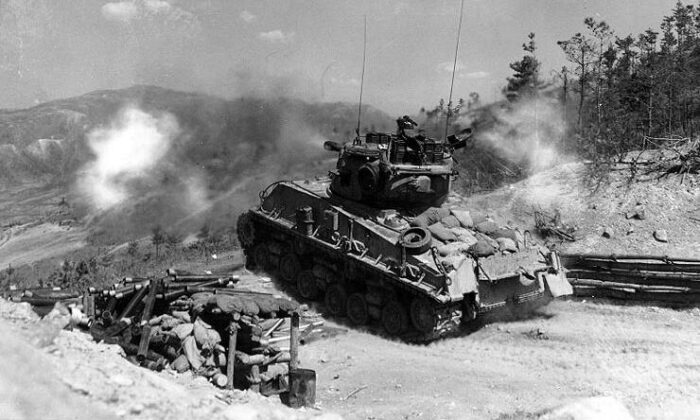 A column of troops and armor of the 1st Marine Division move through communist Chinese lines during their successful breakout from the Chosin Reservoir in North Korea during the Korean War. (Cpl. Peter McDonald/U.S. Marine Corps)
US-China Relations

A former veteran journalist in China has been detained on criminal charges for negatively commenting on a state-backed Korean War movie, which the Chinese regime says is an anti-U.S. and patriotic production.

Reporter Luo Changping was placed under criminal detention in Hainan Province on Oct. 8 over allegations of “insulting heroes” in his comments on the movie, titled Chosin Reservoir, reported state media. The provincial police released the news on China’s Twitter-like microblog Weibo, though the comments did not mention his full name. Police charged him with “harming heroes and martyrs’ reputation and honors.”

Screenshots show that on Oct. 6, Luo questioned the legitimacy of the Chinese troops’ involvement in the Korean War in the early 1950s.

Additionally, historical data shows that a large number of Chinese troops were killed by severe cold and starvation due to the alarming shortage of winter clothing and food during the battle of Chosin in 1950. Among three companies, all men, except two soldiers, froze to death. Chinese authorities lauded them as “ice-engraved companies.”

However, Luo dubbed them “sand-engraved companies.” In Chinese, sand is a derogatory homonym for foolishness. Luo reported that the local temperature at the time of the battle between Nov. 27 and Dec. 7 was as low as -35 Celsius (-31 Fahrenheit).

Luo’s criticism of the movie came under fierce fire from the Communist Youth League, an arm of the Chinese Communist Party, as well as the state-run People’s Liberation Army Daily, accusing him of “insulting heroes and martyrs.” Soon, Luo’s social media account on Weibo was banned and closed.

Chinese authorities claimed that Luo had breached a heroes and martyrs protection law, which was approved in April 2018. Violators may face criminal allegations.

Yet, there the Chinese Communist Party (CCP) has created “heroes and martyrs” by mispresenting their life stories to meet its political agenda.

The movie was co-produced by Bona Film Group and August First Film Studio, which has been directly under the supervision of the General Political Department of the CCP People’s Liberation Army since its establishment in 1951.

As with many Chinese war films, Chosin Reservoir shows exaggerated retelling of history, aiming to depict communist soldiers with a death-defying spirit.

Despite the official narrative, different voices have come out. Besides Luo Changping, editor-in-chief of Beijing Spring, Chen Weijian, regarded the battle as a shame on the Chinese military. He also deemed the movie as “poison” fueling anti-U.S. nationalism among mainland Chinese.