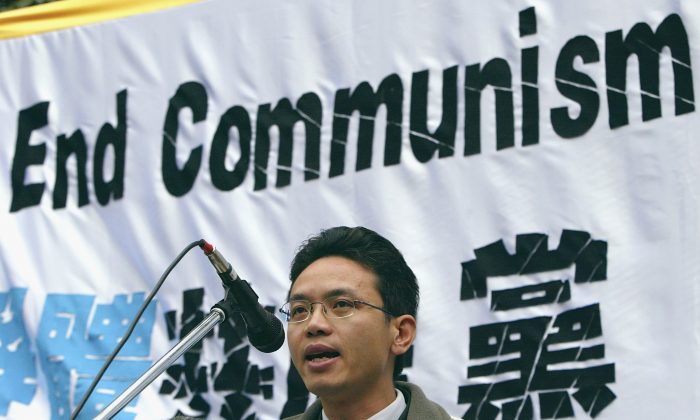 Chen Yonglin addresses the crowd during a rally on June 26, 2005 in Sydney, Australia. The rally was organised to demand that the defectors from China Chen Yonglin and Hao Fengjun be granted asylum by the Australian government. (Mark Kolbe/Getty Images)
Opinion

After speaking to rally in Sydney, Australia celebrating the tenth anniversary of the publication of the “Nine Commentaries on the Communist Party,” former Chinese diplomat Chen Yonglin spoke to Epoch Times about how this book can help people see through the Party’s façade.

“Many intellectuals including myself used to think the Party has a good side, despite its bad deeds,” Chen said. “We mistakenly believed it has done some good things, such as in the reform and opening up.” The reform and opening up refers to a policy begun in 1978 of introducing some market principles into China’s economy.

“Despite the Party’s inexcusable brutality, I did not know that many crimes against humanity had been covered up, which the ‘Nine Commentaries’ revealed,” Chen said.

“Without reading the ‘Nine Commentaries,’ it is very difficult to see the CCP is by nature an evil cult.

“The ‘Nine Commentaries’ is a resounding work of literature with historical significance. It not only opens the minds of the general public, but also those of intellectuals. “

The “Nine Commentaries,” soon after it was first published on Nov. 19, 2004, triggered a wave of withdrawals from the Party

Chen Yonglin walked out of the Chinese Consulate in Sydney on May 26, 2005, where he worked as the first secretary and consul for political affairs.

Just over a week later, on June 4, the anniversary of the Tiananmen Square massacre, he appeared for the first time in public. He spoke at a rally for the Tuidang movement—the movement to withdraw from the CCP. This incident was front page news, and he was interviewed by Australian media.

“After I left the Consulate, I renounced the Party on the Epoch Times website by using my real name to withdraw from the Party and its affiliated organizations,” he said.

“I think the movement helps the Chinese people break free of the mental shackles imposed by the Party’s brainwashing and intimidation tactics, thus encouraging them to think and act independently. When all Chinese people see through the Party’s cover-ups and schemes, the Party will no longer be able to fool anyone, and it will collapse.”

Chen Yonglin said the Party has only gotten worse in the ten years after the “Nine Commentaries” were published.

During its latest attempt to tighten internet censorship, the regime recently made 29 major internet companies in China sign pledges to stay in line with Party policies by agreeing to stifle dissent online.

Chen thinks this move reflects the Party’s fear and paranoia as it tries to nip dissent in the bud.

As for China during the APEC summit requesting help from the United States, Canada, and Australia in its global hunt for corrupt Chinese officials to recover their ill-gotten assets, Chen Yonglin thinks it will not change the game.

“It won’t help the corrupt regime. Once the money is returned to China, it will simply be re-distributed among other officials. The system did not change, and the party has become even more corrupt since the students called for reform in 1989. Besides, much of its anti-corruption campaign is a mask for political infighting and power struggle. It does not change the Party and how it operates.”

He said the Party likes to whitewash natural disasters and present itself as “savior of the people.” As an example, Chen pointed to how the regime delayed rescue efforts during the 2008 Sichuan earthquake, and yet proclaimed lives were saved under the glorious guidance of the Party.

While working at the consulate, Chen was responsible for four years for monitoring the activities of “five poisonous groups” of Chinese dissidents, including Falun Gong, democracy advocates, and separatists from Tibet, Taiwan, and East Turkestan.

After Chen was granted asylum in Australia, he reported that 1,000 Chinese spies were working in Australia. He also said the Consulate spends almost 60 percent of its money and resources on its various strategies targeting Falun Gong.

Since defecting, Chen has spoken at the U.S. Congress, the European Parliament, the Flemish Parliament of Belgium, and the British Parliament, exposing the regime’s tactics for systematically infiltrating the free world, and the dangers it poses due to the Party’s inherent opposition to freedom and democracy.

In June 2007, Chen Yonglin went on a nine-day tour through Canada, during which he revealed documents he says show the regime’s infiltration of overseas Chinese communities and its network of spies.

Chen has frequently attended rallies and forums to support the movement for quitting the Party.

He asks CCP members to stop being lackies of the Party and to stop being assistants of the brutal CCP regime: “let the mouth speak, let the brain think, and let the hands and feet act.”

He calls on people “to resist the violent regime, to take back human rights, freedom, and democracy, and to seek justice for the 80 million people who were wrongly killed by the party.”

Chen says the quitting the CCP movement is “a great, unprecedented spiritual awakening among the Chinese people that will lead to the renaissance of Chinese civilization. We shouldn’t wait for the Party to bow out, but actively work to remove it from the world stage.”