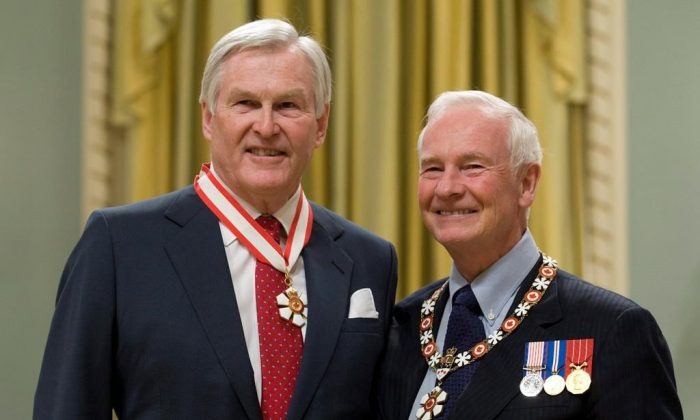 Governor General David Johnston (R) stands with Michael Wilson after investing him as a Companion of the Order of Canada during a ceremony at Rideau Hall in Ottawa on November 17, 2010. Wilson, a former politician, diplomat, and longtime mental health advocate, has died at 81. (The Canadian Press/Adrian Wyld)
Canada

The University of Toronto, where Wilson served as chancellor from 2012 to 2018, confirmed his death in a post on its website on the evening of Feb. 10, saying the school’s flag will fly at half−mast until Wilson’s funeral.

The school’s president, Meric Gertler, called Wilson a “great Canadian” who improved many lives through his “comprehensive excellence, his unassuming generosity and his quiet compassion.

“From spearheading public policy of the highest significance to publicly confronting the challenge of mental illness, Michael Wilson was a true champion,” Gertler said in a statement.

“He bore the title, ’the Honourable,’ by virtue of the public offices he held. But the description came spontaneously to all who had the good fortune to know him.”

Wilson served for over a decade as the Progressive Conservative MP for the Toronto−area riding of Etobicoke Centre, including time as finance minister and minister of international trade under then prime minister Brian Mulroney.

From March 2006 until October 2009, he served as Canada’s ambassador to the United States.

Former prime minister Stephen Harper, who appointed Wilson to the post in Washington, said he served Canada with “exceptional skill and dedication.

“From the Cabinet table to serving our country with dignity and wisdom as Ambassador in Washington, Mike embodied the best of public service,” Harper wrote on Twitter.

After losing his son Cameron to suicide in 1995, Wilson became a passionate advocate for mental health, and often spoke about the need for access to care.

He was involved with a number of advocacy groups, including the Mental Health Commission of Canada and the Centre for Addiction and Mental Health, and was a companion of the Order of Canada.

“We’ve lost a truly great Canadian. My condolences to his family and friends,” Trudeau wrote on Twitter.