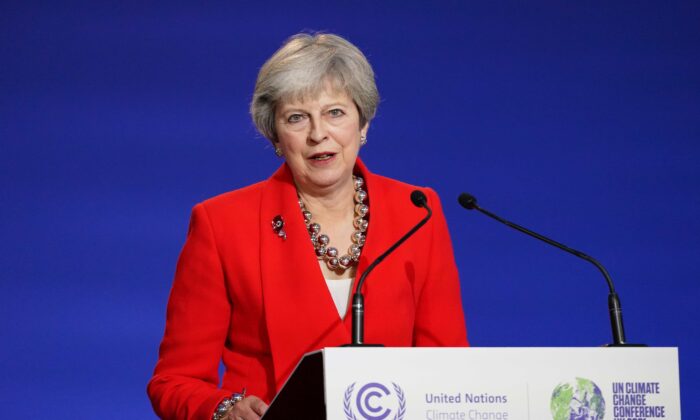 Theresa May speaks as ministers, businesses, and activists discuss rainforests on day seven of COP26 at SECC in Glasgow, Scotland, on Nov. 6, 2021. (Ian Forsyth/Getty Images)
UK

Former British Prime Minister Theresa May has joined other senior Conservative lawmakers to warn the government of the economic impact of COVID-19 restrictions that have been reimposed to slow the spread of the Omicron variant.

The government announced last week that all travellers arriving in England will be required to take a COVID-19 test pre-departure from Tuesday.

Eleven African countries have been added to the UK’s travel “red list,” meaning only British or Irish citizens and residents will be allowed to enter the UK if they have been to one of these countries in the past 10 days. Arrivals from these countries must stay for 10 days in hotel quarantine.

May said in the House of Commons on Monday that Omicron appears to be “more transmissible but potentially leads to less serious illness than other variants.”

Noting that “variants will continue to appear year after year,” she asked Health Secretary Sajid Javid, “When is the government going to accept that learning to live with COVID, which we will all have to do, means we will almost certainly have an annual vaccine and that we cannot respond to new variants by stopping and starting sectors of our economy which leads to businesses going under and jobs being lost?”

Javid replied that there has not been enough data on the severity of the new variant. But he acknowledged that the virus is not going away “for many, many years” and “we have to find ways to continue with life as normal.”

Former transport secretary Chris Grayling said the travel curbs are “a real blow” for the travel and aviation sectors, and urged Javid to keep the restrictions at a minimum despite advice from the scientific community.

Grayling said that the government took a decision to remove all COVID-19 restrictions in July “in the face of heavy scientific advice” to the contrary, and “that decision was the right one.”

He urged the health secretary to “face down the more conservative elements of the scientific community, do the right thing, and keep the restrictions as minimal as possible.”

Javid agreed with Grayling’s suggestion, saying, “Yes, I’m happy to give that commitment for all the excellent reasons he makes.”

The health secretary said MPs were right to talk about the challenges faced by the travel sector, but he said “the answer really lies in making quick decisions about Omicron.”

He said the government will update the House of Commons next week when more data becomes available. “Hopefully if that data is helpful, pressures can be eased,” he said.