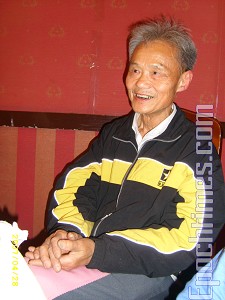 Wan Yaoqiu, former director of the administration office of the Department of Biology, Beijing University, announced his withdrawal from the Communist Youth League (CYL) during an interview with The Epoch Times on May 3, 2007.

Mr. Wan, 76 years old, now lives in Beijing. In 1956, he was a teacher in the Department of Biology of Beijing University and was labeled a “rightist” during the Anti-Rightist Movement initiated in 1957 by the Chinese Communist Party (CCP). His reputation was restored in 1978 after which he returned to Beijing University. When he retired in 1991, he was the director of the administrative office in the Department of Biology.

On March 5, 2007, Wan and 60 other former “rightists” wrote a joint letter to the CCP, requesting a complete negation of the Anti-Rightist Movement and asking for compensation for both spiritual and economical losses. On April 6, Wan attended a gathering of 30 “rightists” in Beijing, which attracted a lot of attention.

Wan's Announcement to Withdraw from the CYL

“I was instilled with communism when I was young and I thought the ideology of communism was good and stood for the happiness of people, so I joined the CYL. My experience and observations over the past tens of years, particularly, witnessing the bloody past of the CCP during the Anti-Rightists Movement, the Cultural Revolution, the Tiananmen Square Massacre and the persecution of Falun Gong, changed my opinion of the CCP entirely. In the past year, I realized that the CCP is in fact a cult that has committed countless crimes.

“I feel lucky that I didn't join the CCP. Although I hated the CCP and already withdrew from the CCP's organizations in my mind a long time ago, I still decided to make a public announcement today to withdraw from the CYL. I want to separate myself from the shameful history of being a CYL member and detach myself completely from any relationship with the CCP.”

Encouraging Others by Using His Real Name

When Wan was advised to choose a pseudo-name to quit, he emphasized repeatedly that he must use his real name. He said, “Using my real name not only frees myself, but also sets an example for others and will encourage them.”

When asked what if the CCP would persecute him if he uses his real name to quit the CYL, Wan said, “It doesn't matter. What I said is true. That's what I understand. I feel I must speak the truth when I am alive.”

Wan revealed that, “many veteran CCP members and officials I know have the same opinion as I have. But they are afraid of being harassed if they express their opinion publicly. I have many friends like that. Many of them have read The Nine Commentaries and they all agree with the viewpoints of the book.”

Quitting the CCP is a Spiritual Movement

Wan Yaoqiu expressed, “Quitting the CCP is a spiritual movement. It is meaningful, rational and peaceful. It spreads fast and can wake people up. At least, it tells people to take another look at the CCP. Chinese people can not free themselves without seriously thinking about the CCP.”

Wan Yaoqiu said, “CCP will for sure collapse and I will be able to witness this. This violent and brutal dictator does not want to give up its power, so it is doomed to end. It cannot exist and should not exist. I am very confident about its collapse.”

China Will Be Better Without the CCP

As for China's future after the CCP, Wan Yaoqiu said, “China will definitely be alright after the CCP collapses. If the CCP handed over the power, the people can make China into a much better country. The CCP is merely a group of ordinary people. They are not more intelligent than others. They are, in fact, very bad and brutal.”

The CCP is the Worst Cult

When talking about his current opinion on the CCP, Wan Yaoqiu pointed out, “The CCP is an evil cult and a liar. The communist revolution is a big lie. The CCP continues with killing during times of peace, which is unprecedented in history. The biggest disasters by humans were caused by communists.” He continued, “Everything about the communist party is false. It exploited the farmers who gave up their lives fighting for the CCP. After the CCP seized power, it became a dictator. The CCP claims itself to represent farmers and workers, but these groups live a very poor life and do not enjoy any freedom or rights.”

The CCP is Not China

Wan Yaoqiu said, “The CCP is not China and the People's Republic of China is merely the current dictatorship in mainland China. The CCP grabbed its power through violence, so it was not elected by people; hence it does not even match the name “Republic.”

Wan Yaoqiu's father, Li Qizhong, was one of the first group of students of the renowned Huangpu Military Academy. He was a CCP special agent when he worked as an officer of the army of the Republic of China [1]. The CCP ordered him to collect military information and he persuaded high-ranking officials to surrender during the Chinese Civil War [2]. Due to Li's “achievements” he became a high-ranking official of the CCP central regime after the CCP seized power. Li died in 1989 in Beijing. Wan's mother committed suicide in 1968 during the Cultural Revolution.