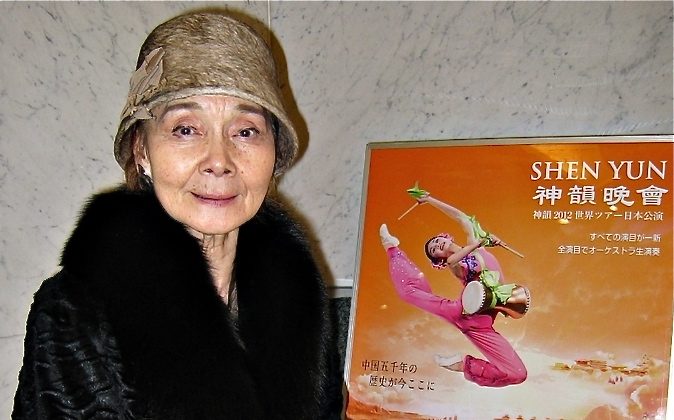 Ms. Takagi owns a dance institute. She has taught many students, including Yoko Morishita and Junko Abe, famous and active ballet dancers of the dance community in Japan. (Ren Zihui/The Epoch Times)
News

HIROSHIMA, Japan—Shen Yun Performing Arts New York Company performed in Hiroshima on Feb. 19 as part of its tour of Asia. The city of Hiroshima, the third stop in Japan, has invited Shen Yun to perform three times since 2009. Shen Yun, which represents the 5,000 years of traditional Chinese culture, with an all new program each year, performed at the Hiroshima City Cultural Exchange Hall. Takagi Reiko, a well-known former ballet dancer, was deeply moved by the performance.

Takagi Reiko has nearly 60 years of dance experience. She has performed in famous ballet shows such as Swan Lake and Walnut Shelf.

“I dropped my own notions and watched Shen Yun as a sheet of blank paper,” she said. Ms. Takagi said she had bought the best seat in the theater and could see clearly the expressions and movements of every performer. “It is a great seat. I didn’t miss any expressions of the performers. It’s fabulous! The performance of male and female actors was just fantastic. The most interesting program for me was the young monks. They made me quite cheerful.”

Ms. Takagi has participated in and watched a variety of ballet performances, but she was still amazed by Shen Yun’s animated backdrop, saying: “Wow! Where do they get such wonderful and creative ideas? I wanted to jump into the backdrop, too. It’s really extraordinary.”

“I was really stunned by the program of the Monkey King [How the Monkey King Came To Be]. I was awe-struck. How he jumped out of the backdrop and then to his movements. I was just overwhelmed, wondering how these could be made. It was really magnificent.”

Although Ms. Takagi is a senior, she still has the unique temperament of a dance performer. She said that every Shen Yun program was refreshing and incredible for her. “The voices of the vocalists were just amazing. I was wondering where the voice came from. Was it really a human voice? It’s just incredible. I listened with a humble and adoring heart.”

Ms. Takagi felt amazed by the erhu solo performance by musician, Qi Xiaochun, saying, “Wow, It was very beautiful. It’s the first time I have heard the performance of an erhu. The melody was really wonderful. I felt happy that I could listen to such a performance.”

Ms. Takagi owns a dance institute. She has taught many students, including Yoko Morishita and Junko Abe, famous and active ballet dancers of the dance community in Japan.