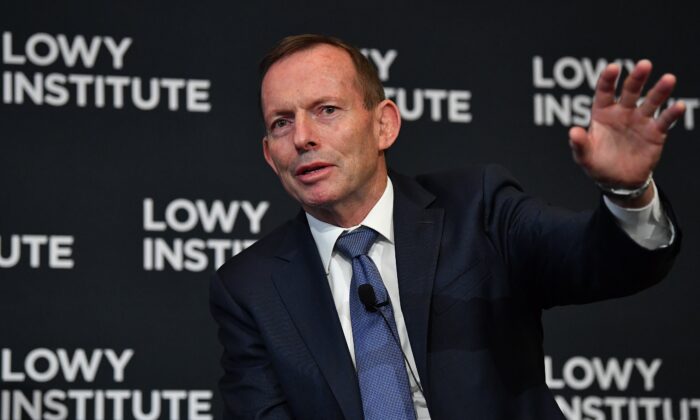 Former Australian Prime Minister Tony Abbott has revealed that he is visiting Taiwan with the hopes of ending the island’s isolation on the international stage.

The visit comes amid heightened tensions in the Taiwan Strait with Beijing and ongoing moves by democratic nations to bolster alliances against Chinese Communist Party (CCP) aggression in the region.

Abbott made the remarks to Taiwanese President Tsai Ing-wen at the presidential office in Taipei. The former prime minister (who served from 2013 to 2015) said it was critical fellow democratic nations stood “shoulder to shoulder” with Taiwan.

“It is in large measure to try to help to end this isolation from which Taiwan has been suffering for so many decades that I am here in this country, and I do hope that this will be the first for many visits,” he said.

“Taiwan is in many respects a model for the wider world,” Abbott said. “Over the past 70 years, Taiwan has transformed from an impoverished dictatorship into a vibrant, dynamic, pluralist democracy. You have demonstrated to all the countries of this region that it is possible to be rich and free.”

“Of course, not everyone and not everywhere is pleased at Taiwan’s progress, and I do note that Taiwan is challenged on an almost daily basis by its giant neighbour,” he continued.

“It’s important that we get the balance right in the future,” he said.

Abbott is expected to address the annual Yushan Forum on Oct. 8.

Australia and the United States, although having no official diplomatic ties to Taiwan, have indicated an intent to continue strengthening ties with the democratic island at the most recent AUSMIN summit.

Abbott believes nations in the Comprehensive and Progressive Agreement for Trans-Pacific Partnership (CPTPP) should accept Taiwan’s application to join the Pacific trade bloc but has warned against allowing Beijing to join.

“In no way should China be allowed anywhere near the TPP until, at the very least, it drops its trade boycott of Australia,” he told a parliamentary inquiry last month.

“The last thing we need is further integration of China into the world economic order.”

The China-Australia Free Trade Agreement was finalised under Abbott’s prime ministership; however, in July, the former leader conceded that the government had misread the CCP’s intentions.

“As late as 2014, when that free trade deal was finalised, we did have a very benign view of China,” he told the Policy Exchange to think tank. “Now, in retrospect, it looks like wishful thinking.”

Meanwhile, current Australian and Japanese ministers have indicated a reluctance to allow China to join the CPTPP, which encompasses 11 nations and covers 13.4 percent of global GDP.

Michael Shoebridge, defence director at the Australian Strategic Policy Institute, said Australia’s support of Taiwan joining the trade bloc and looking potentially at a free trade deal with the island would be “positive steps.”

“This all raises the cost to Beijing if it uses force against Taiwan and lets Taiwan know they aren’t facing Beijing alone,” he told The Epoch Times.