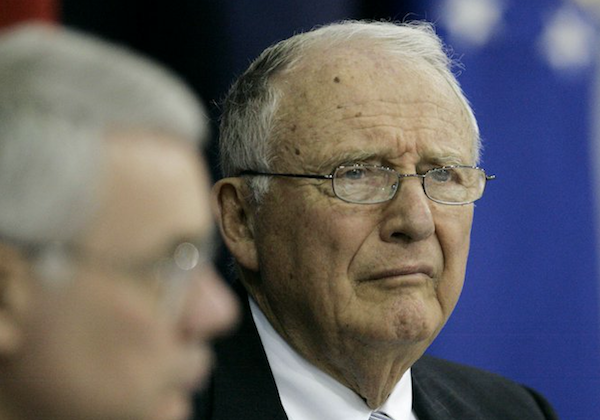 John O. ''Jack'' Marsh, Army Secretary during the Reagan administration and co-chairman of the independent review group, meets with officials at Walter Reed Army Medical Center to discuss their findings, in Washington. On April 11, 2007. (AP Photo/Haraz N. Ghanbari)
US News

NEW MARKET, Va.—Former Secretary of the Army John Marsh Jr. was laid to rest on Feb. 15 at a Civil War battlefield in Virginia where he developed a love for history and the military.

Former Vice President Dick Cheney was among the mourners who gathered Friday for Marsh’s funeral at the Virginia Museum of the Civil War and burial at New Market Battlefield State Historical Park, The Northern Virginia Daily reported.

Cheney said some of Marsh’s admirable qualities were a love for the Army, in-depth knowledge of history and the ability to rise above partisanship. He said Marsh was the epitome of a patriotic American, loyal soldier and successful statesman.

After leaving Congress in 1971, Marsh served as an assistant secretary of defense and national security assistant to Vice President Gerald Ford, whom he later served as presidential counselor. He served as Army Secretary from 1981 to 1989.

Col. Keith Gibson said Marsh visited the New Market battlefield as a child and was captivated by its history.

“For that young boy, the battle was more than a booming cannon and clashing sabers,” Gibson said. “For Jack Marsh, the battle was a demonstration of the most vital elements of character and human conduct, public service, duty, integrity, selflessness,”

Chaplain Robert Phillips said that Marsh “was ready to go” during his last days and showed no fear, angst or “uncertainty of the unknown.”

“He had accomplished all of the things he wanted to accomplish, he had made his impact, he had peace with his God, and he was ready to go,” he said.