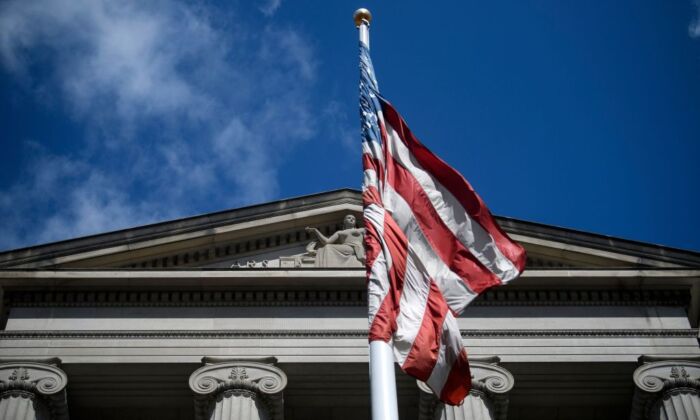 The American flag flies outside the US Department of Justice in Washington, DC on March 22, 2019. (Brendan Smialowski/AFP/Getty Images)
US-China Relations

A former professor at the Air War College has pleaded guilty to making false statements regarding his relationship with a Chinese regime official, the Justice Department (DOJ) announced on Oct. 25.

Zhang Xiaoming, a former civilian professor at the Air War College at Maxwell Air Force Base in Montgomery, Alabama, pleaded guilty to making false statements to a federal agent, according to a statement by the DOJ.

Zhang, a naturalized citizen of Chinese descent who began teaching in the Air War College’s department of leadership and strategy in 2003, frequently traveled to mainland China to conduct research for work and to visit relatives, according to the statement.

It was during one of these visits in 2012 that Zhang became acquainted with and developed a relationship with a known foreign official of the Shanghai municipal government. According to the DOJ, Zhang went on to meet the official in person on at least six occasions and exchanged approximately 40 emails with them over the course of slightly more than four years, spanning from December 2012 to January 2017.

At an undisclosed period during this time, prosecutors said that Zhang became aware that the Chinese official was attempting to use him to gain access to sensitive information in his possession and to make connections through him with other individuals who might have valuable information.

As an employee of the Air War College, Zhang held a “secret” security clearance and attended security training sessions that kept him abreast of various reporting requirements concerning suspicious foreign contacts and relationships with foreign government officials, according to the statement. Zhang didn’t report the relationship, even after learning that the official was attempting to gather sensitive information from him, the DOJ stated.

According to the State Department’s recounting of his plea agreement, Zhang made misleading or false statements to authorities on multiple occasions for the purpose of concealing his relationship with the official.

Notably, in August 2017, Zhang denied knowing the official in question when he was asked about the relationship by investigators as part of the process of renewing his eligibility to maintain a secret security clearance.

In 2020, Zhang repeated his denial to FBI agents before relenting and admitting the extent of his relationship with the official, the department said. He also acknowledged that he concealed the relationship because he knew it was improper.

Zhang pleaded guilty to making false statements to a federal agent and will face a maximum of five years in prison, as well as being required to give up any government employment, contracts, or security clearances.

Representatives of Air University, which houses Air War College, didn’t immediately respond to a request by The Epoch Times for comment.