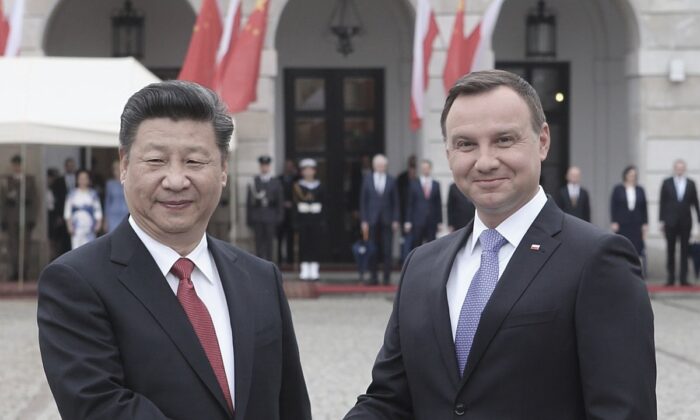 Forget Russia, Why Is China so Interested in Poland?

A real friend, we’re told, is one who walks in when others walk out. As the world turns its back on Russia, one country has instead chosen to do the opposite. That country is China. The alliance between Beijing and Moscow is growing stronger by the day.

After U.S. House of Representatives Speaker Nancy Pelosi made a surprise visit to Taiwan, the Kremlin quickly echoed the Chinese Communist Party’s (CCP) warning to the United States. Is the Biden administration sleepwalking into war with China? Honestly, none of us, not even the experts, really know the answer to this question. What we do know, however, is this: if the United States does go to war with China, Russia will throw its full support behind the latter. This makes China’s growing interest in Poland—Russia’s neighbor and archnemesis—so interesting.

On July 29, CTGN, the state-run network under the control of the propaganda department of the CCP, published a rather interesting piece on China and Poland’s desire to “conduct high-quality cooperation under the Belt and Road Initiative (BRI).” Chinese leader Xi Jinping and Andrzej Duda, the Polish president, held a phone call and promised to “deepen practical cooperation in various fields such as “trade and interconnectivity” and “green development and the digital economy.”

The two countries, according to Xi, must strive to form a stronger bond. Duda, clearly in agreement, welcomed the idea of more Chinese companies investing in Poland.

In truth, Beijing and Warsaw have been close allies for quite some time. In 2016, China established the Asian Infrastructure Investment Bank (headquartered in Beijing), a multilateral development bank that now boasts over 100 members. Poland made history by becoming the first Central Eastern European country to join.

As the Polish researcher Patrycja Pendrakowska previously noted, Sino-Polish relations are at their strongest point since 1991, when Poland bid farewell to communism (while, somewhat ironically, embracing a communist country). Since Poland became a member of the Asian Infrastructure Investment Bank, Polish government officials have played an active role in various Chinese forums and summits.

In addition to numerous state-level visits, the two countries agreed to open a consulate general in Chengdu, a sub-provincial city that serves as the capital of the Chinese province of Sichuan. Moreover, “a new post of Representative of the Ministry of Agriculture and Rural Development was established at the Polish Embassy in Beijing at roughly the same time” the consulate opened its doors, added the Polish academic.

When discussing Poland, the strategic importance of the Central European country cannot be emphasized enough.

Nestled in the heart of Europe, Poland has made major investments in its roads and railways, as well as its aviation and maritime infrastructure. As the Polish Investment & Trade Agency notes, due to Poland’s location “at the intersection of the main transport routes on both the north-south and the east-west lines,” this makes “it a perfect investment location for companies wishing to export their products both to the East and to the West.” This fact is not lost on the CCP.

Philippe Le Corre, a nonresident senior fellow in the Europe Program at the Carnegie Endowment for International Peace, has highlighted how economic relations between Europe and China have strengthened over the last decade. China is now the European Union’s biggest trading partner. Up until last year, rather worryingly, the United States was the EU’s No. 1 trading partner.

Besides being a country of strategic importance, Poland, the seventh biggest country in Europe, has an abundance of natural minerals. In fact, it is now one of the world’s leading producers of coal, copper, zinc, lead, sulfur, rock salt, and minerals used in construction. China may look to Poland for assistance as it continues to run low on coal supplies.

Another thing in short supply in China (and beyond) is zinc. As the author Colin Sandell-Hay has highlighted, zinc is now the fourth-most used metal worldwide; demand is expected to triple by the end of the decade. Used in the production of solar panels and various batteries, Sandell-Hay forecasts “potentially significant production shortfalls over the next few years.”

Zinc also plays a vital role in the automotive parts industry. As analysts SPC have stressed, whether “you’re looking under the hood, inspecting the fuel system or tearing apart the chassis of a modern automobile, you’re likely to find many parts and components that are plated with zinc.” Considering China is now the world’s largest producer of vehicles, manufacturing more than 26 million vehicles last year alone, and Poland is rich in zinc deposits, expect Sino-Polish relations to intensify.

This is especially true if Poland gets booted out of the EU. In October last year, the EU’s top court insisted that Poland was backsliding into its old, communist ways. The EU warned the Polish government to get its act together. Moreover, Brussels hit the Poles with heavy fines (1 million euros per day). The Polish government stood firm and refused to comply. Because of this refusal, Poland has amassed well over 250 million euros in outstanding fines.