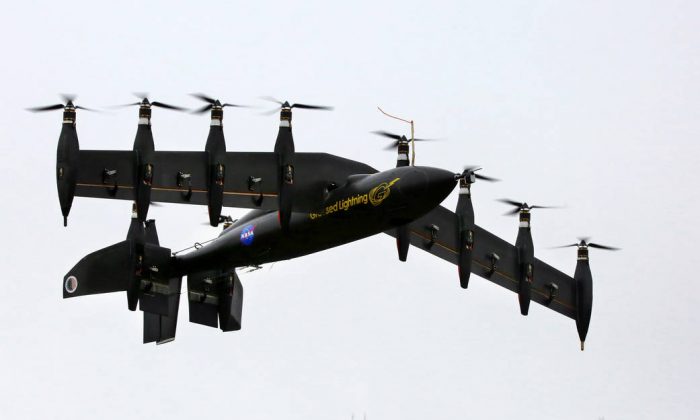 NASA's battery-powered 10-engine plane during at flight test. The electric plane takes off like a helicopter and flies like a plane. (NASA Langley/David C. Bowman)
Aviation News

A new era of flying may be upon us: A battery-powered electric plane with 10 engines developed by NASA has successfully completed flight tests.

The plane, whimsically called Greased Lightning or GL-10, takes off like a helicopter but flies like a plane.

But we can’t get too excited yet. The current model is remote controlled and has only a 10-foot wingspan, meaning the current iteration isn’t exactly designed for paying passengers.

The team at NASA’s Langley Research Center in Hampton, Virginia, is developing GL-10 as an unmanned aerial vehicle (UAV)—a next generation drone, if you will.

“We have a couple of options that this concept could be good for,” said aerospace engineer Bill Fredericks in a statement.

“It could be used for small package delivery or vertical take off and landing, long endurance surveillance for agriculture, mapping, and other applications,” Fredericks stated.

While its still early stages, the team is excited by what they’ve accomplished.

There are thoughts of making a scaled up version with room for one to four people too, said Fredericks.

While its still early stages, the team is excited by what they’ve accomplished.

“During the flight tests we successfully transitioned from hover to wing-borne flight like a conventional airplane, then back to hover again. So far we have done this on five flights,” said Fredericks. “We were ecstatic.”

If you’ve ever been in an electric car, you know that one of its greatest advantages over a conventional car is the lack of noise. In fact, electric cars are so quiet, it’s even a potential road hazard. Not so in the sky, where low decibels, particularly during take off and landing, are a huge asset.

This is one of the advantages the GL-10 offers over a helicopter or a plane. “The current prototype is quieter than a neighbor mowing the law with a gas-powered motor,” said Fredericks.

The next step on the program is to work on aerodynamics.

“Now we’re working on our second goal—to demonstrate that this concept is four times more aerodynamically efficient in cruise than a helicopter,” said Fredericks.

The GL-10 will be the centerpiece of a NASA exhibit at the Association for Unmanned Vehicles Systems International 2015 conference in Atlanta May 4–7.