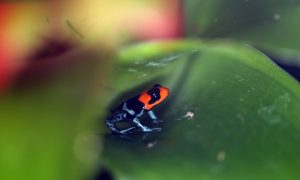 Ozone is a toxic component of the smog that blankets Houston, Texas, in this photo from March 25, 2012. Photo by: Kyle Colby Jones.
Environment

Forests Could be a Thrifty Way to Fight Ozone Pollution

Planting trees may be a cost-effective way to reduce ground-level ozone, a toxic component of smog that contributes to the deaths of about 152,000 people annually worldwide, according to new research. The study is the first to lay out a practical plan and examine the economic impacts of lowering ozone levels with trees.

Scientists used a computer model to forecast what might happen if they reforested part of the Houston-Galveston area of Texas, a region regularly swamped by smog. In 2013, for instance, there were 19 days when air pollution exceeded federal standards at one or more monitoring stations in the area. The model predicted that people could reduce ozone pollution more cheaply with trees than with engineering-based methods such as stricter controls over emissions from cars and factories. Reforestation was cost-effective so long as people could cooperate with existing landowners rather than buying the land themselves. At the same time, a revitalized forest would expand recreation opportunities, increase biodiversity, and help prevent erosion.

Ground-level ozone pollution is distinct from the “ozone layer” high in Earth’s atmosphere. Atmospheric ozone protects the planet by absorbing the sun’s ultraviolet rays. Pollutants formerly used in refrigerants and aerosol cans have destroyed part of this layer. But close to the ground, ozone harms plants and animals, including humans. Ground-level ozone forms from nitrous oxides (NOx) and other pollutants released when people burn fossil fuels. Trees absorb both NOx and fully formed ozone.

On their own, trees won’t be enough. According to the new model, a forest covering 182,000 hectares would only remove about two percent of NOx produced in the Houston-Galveston area. But the cheapest and most effective ways of reducing ozone, such as catalytic converters on cars, are already widely used. In places like Houston, people are looking for new tools to bring ozone down to safe levels. The new study, which appears in the Proceedings of the National Academy of Sciences, suggests forests could be one of those tools.

The location is crucial. Trees planted too close to major sources of pollution could worsen the problem, according to the authors. Ozone forms in the air from a combination of precursor chemicals, some of which trees emit naturally. The net effect of trees on ozone depends on which of the precursors are in shorter supply. So, researchers must know the local air composition before they can say whether trees would help or hurt.

Kroeger’s team has identified potential reforestation sites across the United States. All the sites were once forested and have ozone levels that regularly exceed limits set by the U.S. Environmental Protection Agency. Reforestation could also help other parts of the world that struggle with serious ozone problems, such as Mexico City in Mexico and Shanghai in China, according to the authors.

However, interactions between trees and ozone in the real world are complicated and hard to predict, cautioned David Grantz, a plant physiologist at the University of California, Riverside. Different kinds of trees interact with the air in different ways, and these interactions can change as trees respond to stressors such as drought or damage from ozone exposure. Grantz and the study’s authors agree that an effective reforestation program would need to use native tree species that grow well locally.

“The paper is a good first start. But I think there are a lot of details that will need to be considered in a site-specific manner before anyone can really get credit for planting anti-ozone trees,” Grantz told mongabay.com.

Nala Rogers is a graduate student in the Science Communication Program at the University of California, Santa Cruz. He is a guest author for news.mongabay.com. For the original article and more information, please click HERE.