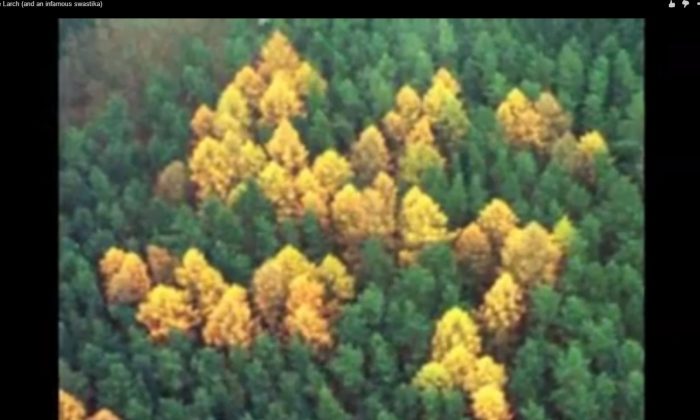 A screenshot of YouTube shows the purported forest swastika.
Europe

‘Forest Swastikas’ in Germany a Cause for Concern for Some (+Photo)

“Forest swastikas” in Germany have appeared in the state of Brandenburg. A local forester said the trees were likely planted by the Nazis in the 1930s.

The swastikas–resembling the symbol widely used by German dictator Adolf Hitler’s Nazi party–were discovered in 1992 by an intern for a landscaping company. He was looking over photos of irrigation lines when he made the discovery.

Other swastika formations were also found in Germany and in other locations since then, reported Der Spiegel magazine in a retrospective of the phenomenon.

The first one originally found by the intern was a 200-foot by 200-foot design of larch trees, which turn orange in the fall, while other surrounding trees stay green.

In 2000, Jens-Uwe Schde told The Associated Press that children may have unknowingly created the design at the behest of foresters in the 1930s.

“It seems to have been something of a fashion among Nazi loyalist forest wardens,” he told AP.

However, it has never been officially confirmed that the Nazis intentionally planted the trees.

The swastika symbol was widely used by cultures for thousands of years–notably by Buddhists–before Nazi rule, and it generally means good fortune or eternity.