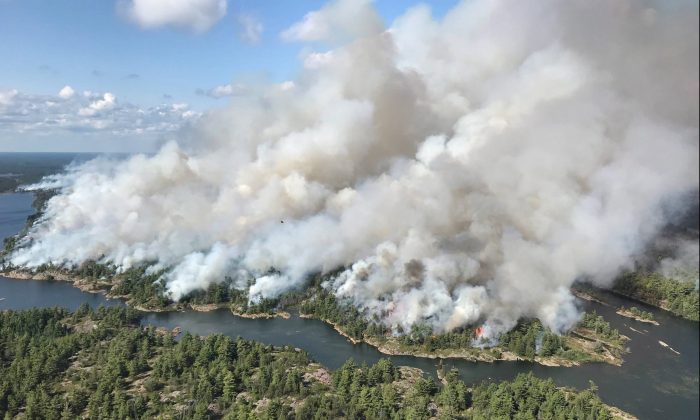 An aerial view taken over the Parry Sound 33 fire is shown in this handout image. The blaze, known as Parry Sound 33, sprung up on July 18. Ontario firefighters have been fighting it with the help of their counterparts from other provinces, as well as the United States and Mexico. (The Canadian Press/HO-AFFES Ignition/Response Specialist-Dan Leonard)
Canada

ONTARIO—Northern Ontario has been facing a series of forest fires, ranging in severity from being held to not under control.

By the evening of July 29, there were 39 active forest fires across the northeast region of Ontario, according to the Ministry of Natural Resources of Ontario. Fourteen of those are not under control.

The Parry Sound 33 blaze is one of the most raging of the northeastern forest fires. Compromising air quality due to smoke along Highway 69, the fire is about six kilometres west of the highway. Fire response crews continued with structural protection and aerial suppression using water techniques on July 29.

In the northwest, there were 94 active fires with 27 not under control by mid-afternoon July 29.

A common cause of these forest fires is lightning, with human activity as a cause for some as well.

Wildland fires are a natural part of forest ecosystems. Some natural fires are not controlled and a small number of fires are prescribed by authorities to help maintain healthy ecosystems, according to Natural Resources Canada. This makes fire control strategies a complex process.

The ministry reports that Ontario is receiving support from across North America. Over six hundred firefighters and support staff, along with equipment, came from across Canada, the United States, and Mexico.

Alberta Premier Rachel Notley announced the passing of a firefighter from Alberta in a statement posted on Twitter.

“We are one country, and we look out for one another,” Rotley said in the statement, “Mr. Gadwa’s brave and selfless actions will be remembered.”

Many Canadians offered their condolences on Twitter, including Premier Doug Ford who extended sympathies on behalf of Ontario.

While observing the fire suppression effort in Northern Ontario today, we honoured and remembered Jerry Gadwa from Alberta, who unexpectedly passed away while fighting forest fires in Red Lake, ON. The people of Ontario extend our deepest sympathies to his family.

The ministry released an interactive map with information about the locations and statuses of forest fires around the province.