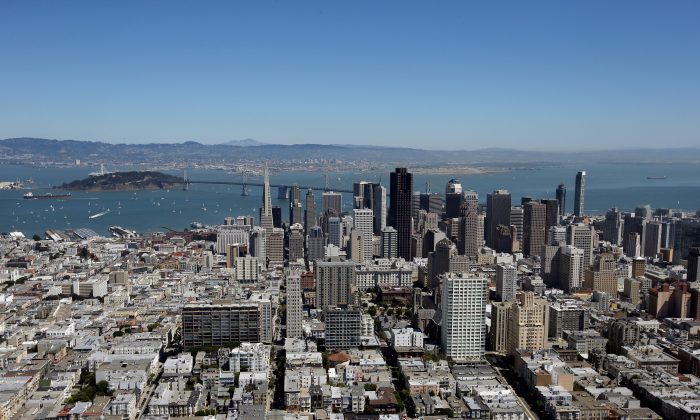 During the last year, Chinese kept buying up U.S. real estate, but cities like New York and San Francisco are getting used to it. Political instability, rising purchasing power, and lifestyle are the deciding factors for these purchases.

Coastal cities in the United States remain the most popular destinations, and for years the top three have been New York, San Francisco, and Los Angeles.

New York is the gold standard for any real estate investor, said Joan Brothers, president of Manhattan Boutique Real Estate, and investing in Manhattan is a no-brainer.

While that remains true, the recent data from Chinese real estate website Juwai.com, shows Chinese buyers are snapping up properties from inventory-starved San Francisco at a record pace. California is currently the top search and Nob Hill of San Francisco the most preferred region.

Half of all San Francisco properties are sold to Chinese investors, who like the lifestyle (51 percent) according to Juwai. Education came second at 23 percent and investment came in third at 19 percent. Buying property to immigrate into the United States came last at 7 percent.

As for lifestyle, developers are learning to cater to certain needs a foreign buyer might have, said Alan Mark of The Mark Company. Mark has been helping developers market their properties all over the West Coast for about 20 years, guiding them to focus on the buyer.

There is already a large Chinese community in San Francisco, and a third of the population is Asian.

“You typically see with a high rise building [that] one-half of buyers are Asian,” Mark said. But what’s changed in recent years is that these buyers are traveling back overseas frequently, or are students whose parents visit and go home often.

San Francisco is really a design-driven city, which makes it unique with respect to lifestyle Mark said. The two most important things to the buyer are the location, and the unit’s finish.

“This town has a huge percentage of people who are creative; where aesthetics are really important,” Mark said. Most people will compromise on location, but there are some who won’t compromise on design at all.

Each potential buyer fills out a questionnaire, and for about 15 years Mark has gathered information on demographics, location, and rationale. Mark personally takes an interest in working over the floor plans with the architects and developers, and has had it ingrained in him over the years to give the design the widest appeal.

“I’ve taken a number of feng shui courses,” he says. “We always look at the numbers.” For Chinese, certain numbers mean bad fortune and therefore won’t be considered.

A subtle—but important—detail is in the numbers. You never want an address or unit number ending in four, and the unit orientation and placement of stairwells, dead-ends, do end up making a difference.

“Do you really want that expensive of a unit to be on a [floor] plan where some people are not going to be interested in it?” Mark says.

Another element characteristic of San Francisco lifestyle is the wide range of neighborhoods.

“Your condo is you bedroom, while the neighborhood is your living room,” Mark said.

The city is only 47 square miles but consists of over forty neighborhoods, and the same people who shop in Hayes Valley aren’t shopping on Valencia Street just a few blocks over. This further emphasizes the importance of branding your building to the neighborhood. Judging by his company’s data, Mark said, people who apply for one building in a neighborhood often don’t even consider other development projects.

On the other side of the continental United States, Brothers has seen a slight shift in the New York neighborhoods foreign investors are interested in.

The number of foreign buyers of residential real estate has increased lately in New York as well, and Brothers, whose boutique firm specializes in catering to an international clientele, said it’s still typically related to education.

On top of the stability of a Manhattan investment, the 1031 tax exchange is a great opportunity and Brothers said she helps her clients work out long-term plans.

“I don’t know if that exists anywhere else in the world, where you can take your profit and roll it into a new asset and not be taxed on the profit,” Brothers said. “That’s a wonderful vehicle, so we try to think strategically for them.”

“The bulk of them are looking for one or two bedrooms,” Brothers said. Despite the short supply, there’s always something that’s good on the market, and typically three to five really fitting properties.

There’s always something good available, but it’s getting aggressively competitive, Brothers said. In April, Brothers locked in a unit at The Savoy for a client, and by the time it closed in May, prices had gone up $100,000–$200,000.

“With each buyer I’ve represented, lately, I’ve had five scenarios. You’re negotiating on five different deals on the hope that one is going to work out, because on each one of these there’s five other players trying to engage that broker. It’s pretty wild,” Brothers said.

Brothers said she hasn’t had to bid over asking price for her clients yet, but expects it to be inevitable sometime over the next six months.

“We’ve been lucky to lock in at [the asking price],” Brothers said. Having a trustworthy brand and ready buyers has helped.

Xinyuan Real Estate Co. plans to spend $100 million on development sites in the coming weeks according to Crains, and will break ground this year on the multifamily Williamsburg site in Brooklyn it purchased last year for $54 million.

Greenland Holdings recently agreed to pay over $3 billion for 70 percent of the 6,430-unit Atlantic Yards development in Brooklyn, and Fosun Group paid $725 million for the 1 Chase Manhattan Plaza tower in October.