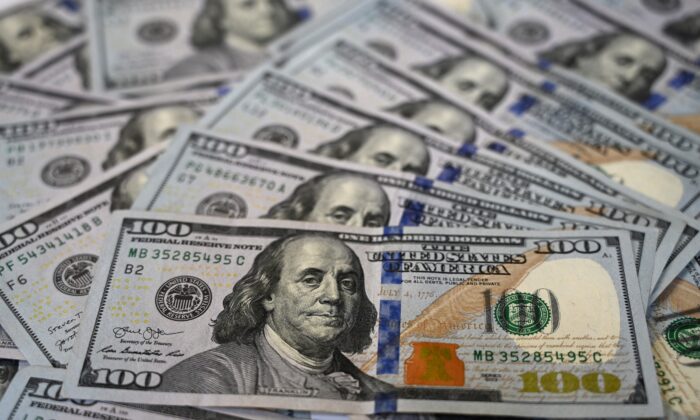 U.S. banknotes are shown in a picture taken on Dec. 7, 2021. (Ozan Kose/AFP via Getty Images)
Viewpoints

There’s hardly a week that goes by where a news outlet or pundit isn’t calling for interest rates to go significantly higher. As the Federal Reserve further cuts its monthly bond purchases from its quantitative easing program and is expected to end its purchases in March, many still believe there’s little demand for U.S. government debt. Confounding these so-called experts are the monthly Treasury debt auctions, where foreigners continue to purchase large amounts of U.S. government debt.

The behavior of foreign investors and central banks baffles most investors and professional money managers. Many look back to the 1970s when inflation seemingly led interest rates higher, so it only seems logical with the year-over-year rate of change in the consumer price index at the highest level since early 1982 that yields must rise significantly.

With eager anticipation, investors hope the next Treasury auction will see weak demand to validate their view that yields must rise, yet it never happens. Despite the continued strong demand from foreign investors and central banks, speculators continue to press their short bets on U.S. Treasuries as they hope to cash in big on rising rates.

The comments by many of these banking experts are that those who are bond bullish better hope foreign demand for U.S. government debt remains strong. While there’s little evidence to support this view, it does make sense at face value. Should the commercial banks scale back their purchases, the burden of absorbing the U.S. government’s deficit spending falls on the backs of foreign investors and central banks.

In the face of rising inflation and assumedly higher interest rates, it’s only a matter of time before foreign demand disappears. Without a healthy appetite for U.S. government debt by two of the largest purchasers of U.S. government debt outside the Federal Reserve, rates must rise. Yet foreign demand remains strong and is most likely to continue to be strong regardless of how high consumer prices rise.

When dollars are transferred overseas through trade with the United States, foreign investors and central banks choose to hold some of those dollars in reserve. Rather than sit on cash that doesn’t pay a yield, they choose to buy U.S. government securities to hold them to maturity. The more goods and services foreign countries export to the United States, the more dollars they accumulate and the more reserves they need to purchase.

The accumulation of U.S. Treasury securities by a foreign country is a sign of prosperity and wealth in a dollar-based global reserve system. To accumulate more U.S. government debt, a country simply needs to be a net exporter with the United States. When supply chains were shut down during the pandemic, exports to the United States also ground to a halt.

Based on the most recent data, more than 100 ships are sitting somewhere off the ports of Long Beach and Los Angeles waiting to berth. When cargo is unloaded, it’s paid for in dollars, and those dollars are transferred back to the foreign countries where the cargo originated. The excess dollars that get transferred back will get converted to reserves by their foreign owner, who would rather hold interest-bearing Treasury securities than cash.

As foreign producers race to export as many low-cost goods and services while the United States is mired in high inflation, the United States will export large amounts of dollars overseas in exchange. Some of those dollars will be used in commerce and the rest will be converted into reserves.