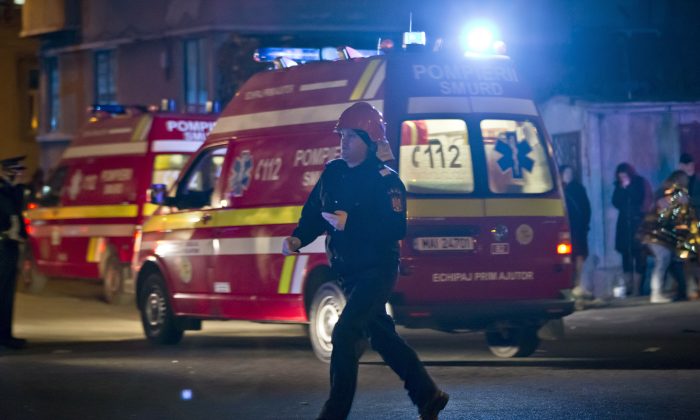 A firefighter runs at the site of a fire that occurred in a club in Bucharest, Romania, early Saturday, Oct. 31, 2015. (AP Photo/Vadim Ghirda)
Europe

BUCHAREST, Romania—Specialist doctors have arrived in Romania to help treat those injured in the fire in a Bucharest nightclub that killed at least 30 people.

Raed Arafat, an emergency situations official, said Monday that a handful of specialists have arrived from Israel and France to help treat the 140 people who were hospitalized after the fire Friday night. Of those, 90 are in a critical or serious condition and authorities say the death toll is expected to rise “significantly.”

The Israeli medics are working at the Bagdasar-Arseni, an emergency hospital. Hospital spokesman Andrei Carantino told The Associated Press the medics had brought special bandages to treat severe burns and would work with Romanian doctors there, but not operate. Carantino said seven patients at the hospital have critical injuries from the Friday night blaze and stampede.

Fire engulfed Colectiv, a basement club, during a rock concert. Witnesses say the blaze erupted after a spark on stage from a heavy-metal pyrotechnics show ignited foam decor and sending panicked people rushing for a single exit.

Romanians, still in shock, arrived in their dozens at the club Monday, laying flowers and lighting candles for the victims, many of them young. As the nation went into its third day of mourning, schools in Bucharest instructed students to dress in black, and some teachers suspended classes and let pupils pay their respects at the club, which has become a shrine to the dead and the focus of the nation’s grief.

Arafat said that even if burns patients initially survive their injuries, medical problems can continue long after as “they tend to evolve in a stable manner and then start collapsing.” He said some cases need frequent operations and their wounds need to be cared for.

The government says it will cover patients’ medical costs.