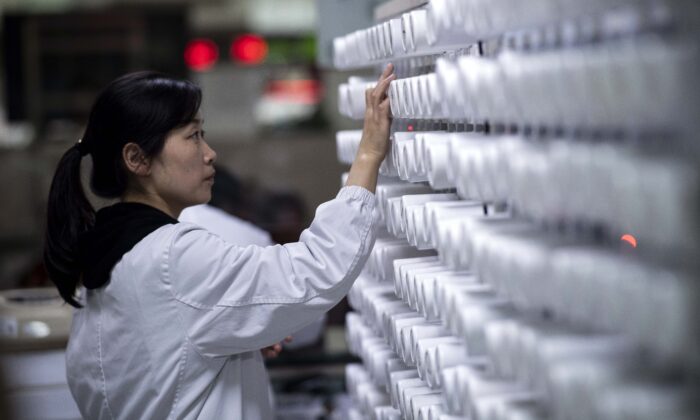 A woman sorts medicine in the pharmacy of the Yueyang Hospital, part of the Shanghai University of Traditional Chinese Medicine, in Shanghai, Nov. 7, 2018. Johannes Eisele/AFP via Getty Images
Viewpoints

Foreign Reliance for Medicines and Supplies a National Emergency?

Coronavirus impacts a jittery market and reveals U.S. inability to protect its citizens and its economy

With the coronavirus outbreak, we may be in the early stages of what some scientists and epidemiologists say could be a potential global pandemic. That sounds ominous, to say the least. Furthermore, with markets repeatedly setting new and record-breaking highs, many market experts think that a correction is likely in 2020.

As noted in previous articles, the coronavirus—also called COVID-19—could indeed be a Black Swan event. As it is, a market correction is on everyone’s mind. Of course, the perennial market bears and contrarians who make their living by selling fear like to think so. But, the Federal Reserve is certainly not ruling it out, either.

Clearly, with this fast-moving contagion showing no signs of slowing down, the world is a different place than it was just 10 weeks ago. Will the coronavirus crisis in China trigger a market collapse? Not yet, but it could. The fear of that happening is real, and real dangerous.

That’s the big question racing throughout the financial world. And although the statistics concerning the severity and trajectory of the outbreak are unreliable at best, there are a few things we do know.

For one, the viral outbreak is bringing China to a standstill. Many factories are in lock down, as are entire cities.

For another, many of the immigrant or transitory factory workers in Hubei Province who returned to their hinterland homes for the Chinese New Year have yet to return to work. In many cases, current outbreaks, restrictions, and policies make that impossible. Others simply are refusing to take the risk of doing so.

To some degree, all of these factors will indeed affect Wall Street, the U.S. economy, and perhaps even the health of American citizens.

On the demand side, with up to two-thirds of China’s economy idle at times, both construction and car sales will continue to suffer. U.S. earthmover Caterpillar and American car companies see 2020 as flat at best or in continued contraction.

But for how long will much of the Chinese economy be on lock down?

The answer will differ, depending on the industry, the ability of companies to adjust, and frankly, the success of Beijing’s containment efforts.

On the supply side, it makes perfect sense that American companies that are heavily dependent on China-based suppliers will be hurt by the factory closures. In the apparel and tech industries, production slowdowns are expected to improve in some areas and continue to be closed in others. The medical industries, however, are much more impacted. More on that in a moment.

However, it’s not clear how long shutdowns will last, or for that matter, how long re-openings will last. Even before the outbreak, many American manufacturers were in the process of relocating their factories outside of China due the tariffs and other disadvantageous factors. The coronavirus outbreak has only added more urgency to the “get out of China” plans of many American companies operating there.

That would include big athletic apparel makers such as Nike, for example, and high-tech manufacturers such as Apple. Both have experienced production hiccups that have caused supply interruptions.

However, with quicker-than-expected “post-coronavirus” factory re-openings, Apple has recently seen its stock price rebound. That’s in spite of the fact there are already delays in Apple product deliveries. Going forward, more can be expected.

The travel industry could also take a hit from China’s epidemic. Airlines have stopped most flights to and from China. How long that interruption lasts remains to be seen.

The cruising industry has also seen some minor disruptions, but that’s mainly due to appearances rather than reality. Only about 10 percent of volume is to Asia, and the image of trapped passengers aboard infected ships isn’t a pretty one. The optics are bad now, but, barring a global epidemic, cruising should continue to do well in 2020.

Nonetheless, there are other major industries that are now identified as exceptionally vulnerable to the viral contagion that’s sweeping through China. Some of those may surprise you, since they’re of critical value to America’s health and national security.

Over-Reliance on China for Rare-Earth Elements

In technology and defense, U.S. dependence on rare-earth elements hasn’t changed in the 20 years since the United States agreed to allow China into the World Trade Organization and gave Beijing most-favored nation status. Needless to say, with the trade war, U.S. mining companies are now trying to reduce that vulnerability.

The military and economic tensions with China combined with the viral epidemic highlights just how dependent the United States really is on China in critical areas.

Like U.S. dependence on China for strategic rare-earth elements, so too, is the United States overly dependent upon critical medicines, medical supplies, and equipment. About 80 percent of antibiotics used in the United States, for example, are made in China. American pharmaceutical firms will have to scramble to make up that shortfall.

So, too, is the United States critically dependent on China for medical supplies. China can’t even meet its own needs. That includes the very medical devices and materials, such as medical masks and anti-viral medicines, that are needed to fight the outbreak.

But it’s not just the United States that depends on China for critical medicines and medical supplies. Much of the rest of the world does, too.

The geography of the markets, however, is a bit more nuanced than at first glance. Just as a potential medical supply shortage presents stiff challenges to U.S. companies, there may be market opportunities there as well. U.S.-based drug makers, medicine, and medical supply firms could have some very powerful market-driven wind in their sails—or a federal mandate—to fill the supply gaps left by China.

How soon those firms react, or are even able to react, remains to be seen. Markets run on confidence. Once fear is allowed to set in, regardless of its source, the markets will turn south quickly. They always do. Therefore, protecting the country from the outbreak is as much an economic and financial necessity as it is health concern.

As far as U.S. medicines are concerned, 60 percent of manufacturing is done in foreign factories, with China and India making up about 40 percent. That needs to change.

Of course, that huge gap won’t be bridged overnight. Prices are already high as supplies tighten. But, whether it’s through tax incentives, re-directed funds from a bloated social program or from somewhere else, the United States needs to make it a national priority to eliminate these gaps as soon as possible.