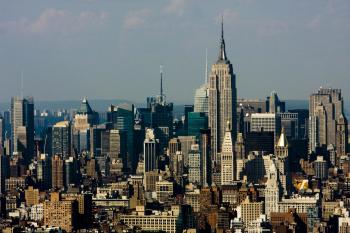 Charlotte Cuthbertson
Senior Reporter
Charlotte Cuthbertson is a senior reporter with The Epoch Times who primarily covers border security and the opioid crisis.
View profile
Follow
biggersmaller
Print
NEW YORK—The United States has been touted as the safest market for investment in real estate and the foreigners are pouring in. A weak dollar combined with optimism for market rebound opens the door for commercial and residential property investments.

“It is generally regarded by most of the world that the United States is the safest, most stable market to invest in. And even more than that, New York is the safest of all cities, said Paul Fetscher, president of Great American Brokerage Inc.

This year's Association of Foreign Investors in Real Estate (AFIRE) survey turned up similar results, suggesting that equity investors are planning to increase investment activity by 40 percent globally and by 73 percent in the U.S. from October last year.

While Wall Street has taken a hit, the financial hub of the world is still housed in New York. “People are willing to accept a lower rate of return because the investment is more stable, plus you are relatively assured of long term capital appreciation,” Fetscher said.

One of Fetscher's clients, an investor from Brussels, has capitalized on the cost between the dollar versus the Euro and made the move to open a French restaurant in the Upper East Side.

Australian based company Centro Properties Group, whose properties include the Westfield Shopping Centers, were over-extended last year and chose to sell off all holdings in New Zealand, while retaining their U.S. portfolio of over 400 retail properties.

In the residential arena, there have been recent reports of droves of Chinese real estate “tourists” snapping up the bargain prices, particularly in New York and Los Angeles.

“Before, it was kind of private, a quiet thing among friends,” Jamie Lee told the LA Times. Lee is a Chinese-American who runs the Los Angeles Convention and Visitors Bureau office in Beijing. “Now it’s full-blown …. It’s huge. Some of these groups are talking about going (on real estate tours) every two weeks.”

Phyllis Pezenik, vice president of DJK Residential, said her company has developed a package for groups of investors from China. These buyers, she said, are looking for investments rather than homes. Chinese investors are looking for condos in the price range of $500,000 to $750,000 range in Midtown Manhattan, Chelsea, and Manhattan’s West Side, according to Pezenik.

DJK Residential has a large property management arm that looks after the properties once they are purchased.