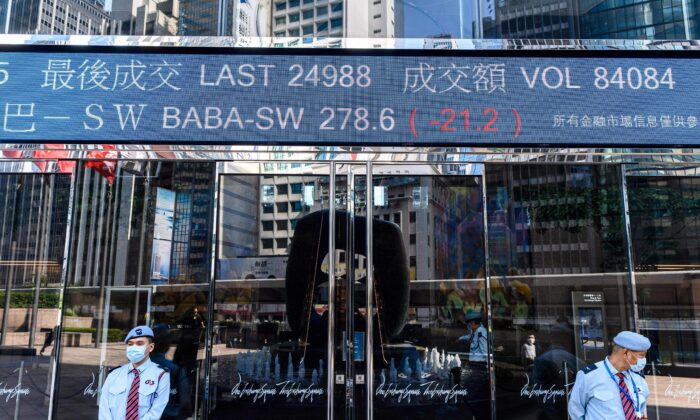 Foreign capital started flowing out of China on a large scale in March. While foreign investors scrambled to sell out Chinese stocks and bonds, state-owned capital has been infilling the market in a bid to maintain its stability and stave off a possible financial crisis.

The retreat of foreign capital affected the Chinese stock market, with all three major stock indices in the A-share market falling by more than 11 percent in the first half of March. The Shenzhen Stock Exchange Composite Index fell the most, by 14.26 percent, state-backed financial media Jiemian reported on March 16.

However, of note, a chart of northbound capital shows there were large northward fund inflows to “save” the market on March 17 and 18. Northbound capital refers to Hong Kong capital or international funds entering the A-share market, commonly known as foreign capital.

Foreign capital is normally not allowed to participate directly in A-share investments due to capital flows in mainland China being regulated. Therefore, a Mainland-Hong Kong Stock Connect mechanism was introduced to enable foreign investors to trade stocks in the two Chinese metropolises—SSE (Shanghai Stock Exchange) and SZSE (Shenzhen Stock Exchange)—through the capital market of Hong Kong, an international financial hub.

“This signals that there is a capital gambling in the stock market,” Mike Sun, a U.S.-based investment consultant and China affairs expert, told The Epoch Times on March 28, “I think it’s the ‘national team’ that’s stepping in.”

“National team” is widely known in China, but does not function only on the football field. According to Tencent, a Chinese portal site, on March 25, “national team” in the stock market refers to a team of state capital investors in the stock market. Its members include Central Huijin Investment that covers asset management and investment; China Securities Finance, which was set up by the SSE, SZSE, and China Securities Depository and Clearing Corp. State Administration of Foreign Exchange and the Social Security Fund are also crucial members.

The Chinese Communist Party-run (CCP) national team leads the speculation mainly on brokerage and bank stocks, controlling the lifeblood of the industry that affect the country’s livelihood, such as the four major state-owned banks; or maintaining stability, such as the stock market bailout.

At a press conference on March 17, the Ministry of Commerce announced that the growth rate of using foreign capital in the first two months of 2022 reached 37.9 percent year-on-year, saying that the Chinese economy trend in 2022 “further boosted the confidence of foreign investors.”

“The CCP only emphasizes the inflow while not mentioning the outflow of foreign capital even if there is an inflow or outflow of capital, ” Dr. Frank Tian Xie, John M. Olin Palmetto Chair Professor in Business and Professor of Marketing at University of South Carolina Aiken, told The Epoch Times on March 26.

Xie questioned the accuracy of the official data, “because part of the purported foreign capital inflow is actually from China’s own funds.”

For example, money from the state treasury is transferred outside China in various ways and then enters the Chinese market after being converted into U.S. capital, thereby receiving preferential treatment as a foreign investment—the equivalent of laundering the money, Xie said.

Foreign capital outflows from China may react to the Federal Reserve raising the interest rate, which possibly attracts capital back to the United States, “but with a fairly modest interest rate increase, it won’t have much impact.” Said Professor Xie.

Given that the Hong Kong dollar is strictly pegged to the U.S. dollar and the exchange rate is fixed, Hong Kong and the mainland will also raise interest rates to avoid arbitrage following the Fed’s move, Xie said.

“Outflows from China on the scale and intensity we are seeing are unprecedented,” said the Institute of International Finance (IIF) on March 24, indicating foreign investors may take a fresh look at the Chinese market after the outbreak of the Russia-Ukraine war, Bloomberg reported on March 24.

“The [Russia-Ukraine] war-induced sanctions led foreign investors to quit the Chinese market because the CCP sides with Russia,” Xie said. “If the CCP supports Russian arms, then China will also be sanctioned.”

Massive foreign capital outflows would bring about a financial crisis in China, including a collapse of the Chinese yuan that would further threaten the exchange rate, stock market, and bond market, Xi added.