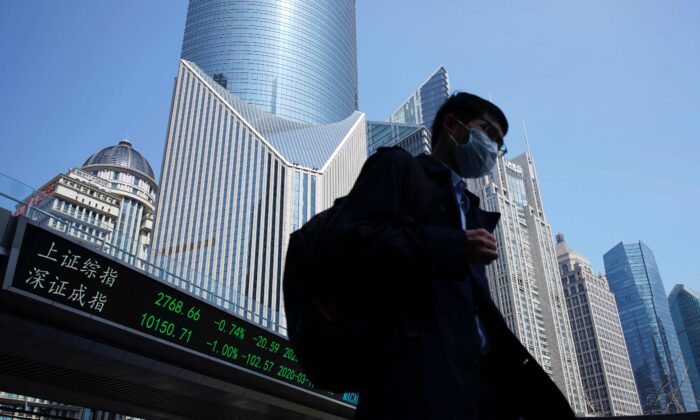 A pedestrian wearing a face mask walks near an overpass with an electronic board showing stock information, following an outbreak of COVID-19 at Lujiazui financial district in Shanghai on March 17, 2020. (Aly Song/Reuters)
Thinking About China

Large net capital flows out of China have officially become a trend as Chinese fixed-income securities have lost their luster to foreign investors.

Capital drawdowns out of China’s interbank bond market exacerbated and continued for the third straight month in April. Most experts blame the shift on a declining yuan currency and lower yield premium over similar U.S. government bonds as the Chinese central bank monetary policy diverges from the United States’ more hawkish stance.

The about-face is in stark contrast to the trend from the last few years, when yield-starved foreign investors flocked to the Chinese bond market due to extremely low yields of U.S. debt compared to Chinese debt of the same tenure, even adjusted for risk.

In the last three months, official data showed that foreign investors’ holdings have dropped by roughly 300 billion yuan. The drop in holdings has been broad-based across government bonds as well as policy bank bonds.

For context, the last time—before this year—that foreign investors’ holdings in Chinese debt declined in consecutive months was in late 2018.

The U.S. Federal Reserve announced a 50 basis point benchmark rate hike, with more to come, while the People’s Bank of China (PBoC) has been contemplating quantitative easing measures to mitigate an ongoing economic disaster driven by lockdowns instituted under the regime’s rigid “zero-COVID” policy.

Despite economically disruptive lockdowns across numerous cities to contain China’s worst COVID outbreak since 2020, the PBoC has remained cautious in its economic stimulus measures, stopping short of drastic measures that could push bond yields even lower.

The PBoC is acutely aware of this trend and is careful to not ease too much relative to the rest of the world lest its actions further destabilize China’s economy and drive the yuan current even lower. Already, the monetary policy divergence has impacted the FX market. The yuan currency has fallen roughly 5 percent versus the U.S. dollar since Jan. 1.

Some market watchers believe the bigger driver in foreign outflows is not rates, but geopolitics. “These outflows began after February 24, when war in Ukraine began. The longer these outflows last, the clearer it becomes that markets are looking at China in a new light since Russia invaded Ukraine,” Institute of International Finance Chief Economist Robin Brooks wrote in a tweet in May.

Perhaps cognizant as to not raise more alarm bells, Chinese authorities have suddenly stopped reporting certain metrics related to foreign capital flows into and out of its onshore bond market.

CFETS did not provide a reason for the missed data reports, which further fuels speculation that CCP authorities stopped reporting so as to not fan the flames of capital outflows by foreign investors selling Chinese sovereign debt.

Regardless, the move—if true—would be a huge step backward for Beijing, which had tried hard to cultivate a semblance of free markets with transparent information flows to attract foreign investors to its domestic markets.