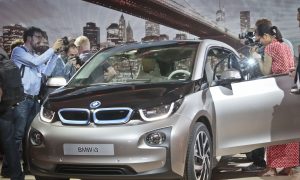 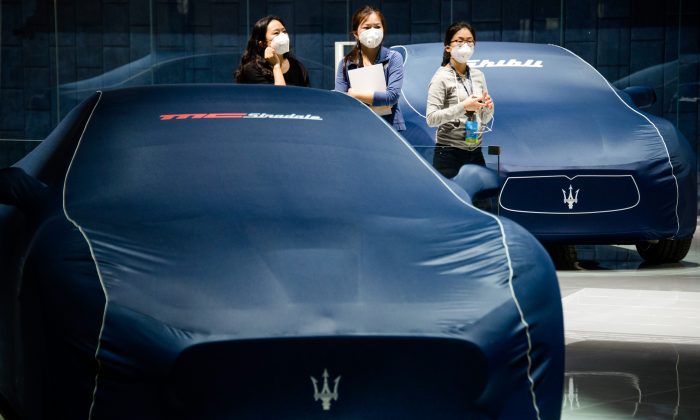 Women stand next to Maserati cars ahead of the 16th Shanghai International Automobile Industry Exhibition in Shanghai on April 19, 2015. (JOHANNES EISELE/AFP/Getty Images)
China

Is This the End of Global Car Makers’ Love Story in China?

As global automakers showcase their latest creations at the Shanghai Auto Show beginning April 22, they find themselves in an increasingly disadvantaged position in the world’s biggest automobile market.

General Motors Co. will bring its Cadillac CT6 flagship sedan, and Volkswagen AG will unveil the new Audi Q7 luxury sport utility vehicle in Shanghai. But behind the pomp and circumstance, foreign automakers operating in China are bracing for a perfect storm of declining sales growth, punitive regulations, stiff competition from domestic automakers, and a burgeoning gray market threatening their distribution channels.

China’s total auto sales increased 3.9 percent in the first quarter, a letdown compared to the 9.2 percent gain recorded in Q1 of 2014, according to official statistics. A 20 percent decline in commercial vehicle deliveries, due to sagging manufacturing growth and negative macroeconomic headwinds, was largely to blame.

Entering 2015, nearly every foreign automaker lowered his or her growth targets compared to 2014.

BMW last week lowered its second-quarter production and sales targets in China, according to memos to its dealers obtained by the Wall Street Journal. The company did not disclose the amount of the revision, but in BMW’s last public forecast released in March, it expected upper single-digit sales gains in 2015, far lower than the 17 percent growth last year.

Volkswagen reported a 2 percent sales gain in Q1, but closed out the quarter with a disappointing decline of 0.6 percent in March. Audi, its luxury marque, saw a sales increase of 7.1 percent for the quarter. Both results were significantly lower than 2014, when Volkswagen and Audi reported growths of 14 percent and 21 percent, respectively, in Q1.

Toyota Motor Corp., the world’s biggest automaker, reported China sales dropping by 21 percent in March, while overall decline for the quarter sales was 0.1 percent. Toyota is still forecasting sales of 1.1 million vehicles in 2015 in China, a 6.8 percent increase from the 1.03 million vehicles it sold last year.

Starting this month, foreign automakers will also be hurt by unregulated gray imports into China.

Chinese car prices are set by the automaker and its dealership network, and any incentives or discounts generally must fall within a range sanctioned by the manufacturer.

This has created opportunities for price arbitrage. Unauthorized imports of luxury cars, or “parallel imports” according to industry lingo, in China have surged over the last few months, threatening the profitability of foreign automakers and their Chinese dealers. Automakers officially discourage this tactic, stating that imported cars may not be guaranteed to run on Chinese gasoline or be compatible with locally produced parts.

Any appeals to Beijing will be fruitless, as the regime itself created the gray market. In a pilot scheme, which officially kicked off in early April, Chinese regulators allowed local dealers registered in Shanghai’s new free-trade zone to import cars directly from abroad without the consent of foreign manufacturers.

Parallel imports typically sell at about a 15 percent discount to official dealerships, and foreign automakers have no control over inventory and pricing.

China launched the test program as part of broader “anti-monopoly campaign by the government to improve market order and bring down prices of imported cars,” an official at the Ministry of Commerce and the National Development and Reform Commission told Reuters. The “anti-monopoly” campaign is actually a misnomer, as there are dozens of automakers selling cars in China, making a monopoly impossible. The price is actually market-driven, as there is a price premium on foreign-branded cars versus domestic brands due to their quality, reliability, and history. And demand exists to meet the price. The problem is that Chinese automakers, to date, have been unable to compete.

For now, parallel imports are limited to luxury brands given the increased margins. But if the program launches nationally, all foreign automakers will suffer.

From a distance, Chinese leaders have long admired the design, technology, and manufacturing prowess of American and European automakers. To jump-start its own auto manufacturing base, China mandated that any foreign automaker wishing to produce cars in China must form a joint-venture with a locally owned company to share in profits and most importantly, transfer technology to China.

Decades later, China has become the most important market for global automakers, while the forced foreign-domestic partnerships have yielded little innovation for China’s own automakers.

Witnessing their successes, and the relative failure of its indigenous automakers, Beijing has long yearned to take foreign automakers down a few notches. And when government subsidies and technology transfers aren’t enough to level the playing field, regulators resorted to fines.

China is the biggest market for BMW Group, comprising 22 percent of total group deliveries in 2014.

Last September, China handed down several fines to foreign automakers as a result of “anti-monopoly” probes. Audi was fined $40.5 million and Chrysler $5.2 million. The automakers were fined for advising their dealerships a minimum sales price for their vehicles.

Similar “anti-monopoly” penalties have been levied against foreign technology companies operating in China, the most recent example being Qualcomm’s $975 million fine in February. Fifty-seven percent of foreign companies surveyed felt that China was “singling out” foreign companies unfairly, according to the 2015 annual business climate report by the American Chamber of Commerce in China. Most companies targeted belonged to “research and development” industries such as technology, pharmaceuticals, aerospace, and automotive, where foreign firms dominated a particular sector without much Chinese competition.

After decades of preferential treatment and technology transfer for domestic automakers, Chinese car companies seem to have finally carved out a niche in the local market.

Sales of SUVs in China jumped 64 percent in March, compared to just a 3.3 percent gain for all cars during the same period. The majority of SUVs were sold by China’s domestic brands, with Great Wall Motor, Changan, and Geely being the most successful.

The result? China’s domestic brands have increased their combined market share to 43 percent in Q1, up from 39 percent last year. In China’s “new normal” economy, cheap and modest often trumps expensive and ostentatious.

And that’s another sign that 2015 could be a rough one for foreign automakers.