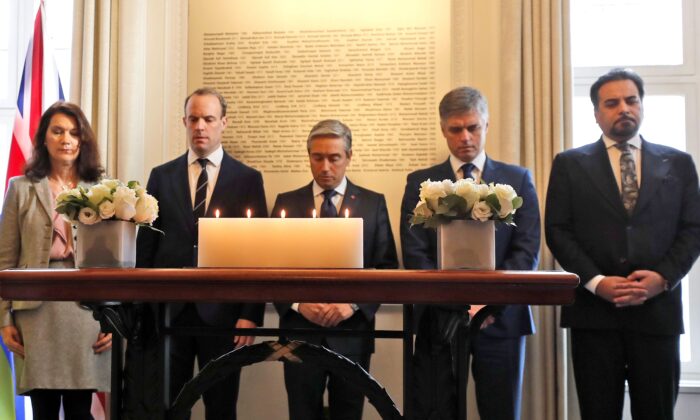 LONDON—Foreign Affairs Minister Francois-Philippe Champagne is opening an international meeting in London today with a moment of reflection to remember the victims of the Ukrainian jet shot down by Iran.

Canada is chairing the gathering of representatives of four other countries that lost citizens in the crash: Ukraine, Sweden, Afghanistan and Britain.

The group hopes to emerge with a united position on moving forward with Iran, which has sent mixed signals about the investigation that it is leading.

The federal government hopes it will lead to justice and financial compensation for the families. All 176 people aboard were killed last week, when an Iranian missile hit Ukraine International Airlines flight PS752.

Dutch officials are also coming because of the country’s expertise stemming from a five-year-long probe of the deadly shootdown of Malaysian Airlines flight MH17 over Ukraine, which investigators have blamed on Russia.

Iran is leading the investigation because the crash occurred on their soil, but there are precedents for handing that responsibility over to another country that suffered losses. Iran lost 82 nationals in the crash, while 57 Canadians were killed.

The Canadian Press has independently confirmed at least 89 victims with ties to Canada, many of them students and professors returning after spending the December break visiting relatives in Iran.

Shortly after the crash, a senior Iranian aviation official said the country would not turn over the black boxes from the 3 1/2-year-old Boeing 737-800 to the American company.

Transport Minister Marc Garneau says Iran is co-operating with the two Canadian investigators on the scene, but he wants Canada to have official standing in the international investigation.

“We will be sending very, very strong messages to Iran,” Garneau said of the meeting on Wednesday in Ottawa.

“President Rouhani has made some comment to the effect that they want to co-operate but of course the question on everybody’s mind is: will they deliver on that promise?”

On Wednesday, the prime minister’s parliamentary secretary said the government was exploring options for compensating victims’ families in the interim because the international process could drag on for years.

Prime Minister Justin Trudeau has been working the phones with his international counterparts in recent days, including United Nations Secretary General Antonio Guterres and the leaders of Afghanistan, the United Arab Emirates and Jordan.

“The Prime Minister and the Secretary-General reaffirmed the need for a complete and thorough international investigation. They welcomed the involvement of the International Civil Aviation Organization (ICAO) in the investigation,” said the readout of the Guterres call. ICAO is based in Montreal.