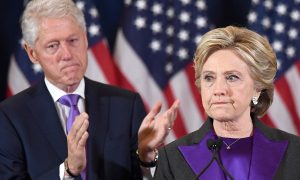 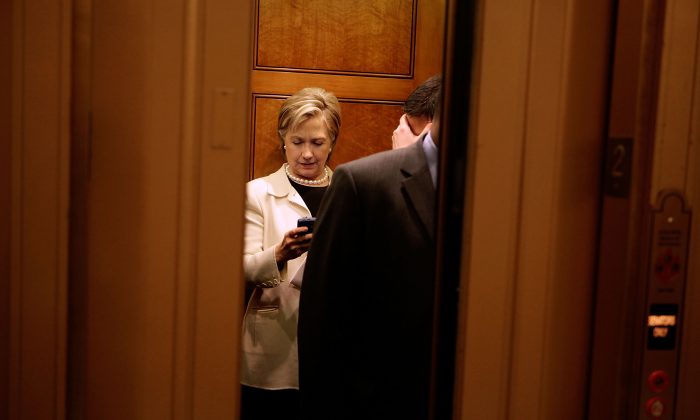 Secretary of State-designate and U.S. Senator Hillary Clinton (D-NY) looks at her BlackBerry while on an elevator at the U.S. Capitol in Washington on Jan. 7, 2009. (Chip Somodevilla/Getty Images)
US News

Foreign actors obtained access to the private, unauthorized email server that Hillary Clinton used during her time as secretary of state, according to Rep. Mark Meadows (R-N.C.)

“There is no denying that foreign actors actually had access to the server,” Meadows told The Epoch Times at a conservative political conference in Australia on Aug. 10. “The question is, to what extent. And I think there are several members of Congress who believe that [it] was a lot more invasive than perhaps the original inspector general’s report.”

Meadows made the statement while responding to a question about a supplementary report that Department of Justice Inspector General Michael Horowitz sent to lawmakers. In testimony before Congress in 2018, Horowitz promised to update the House Judiciary and Oversight committees on what steps the FBI took to investigate a lead from the Intelligence Community Inspector General (ICIG).

The ICIG told the FBI that an anomaly in the metadata of Clinton’s email messages suggested that a foreign third-party received a copy of virtually every email that passed through the server.

Despite the alarming nature of the ICIG’s lead, it wasn’t included in the 568-page report by the inspector general on the handling of the Clinton email case. The report also doesn’t address what digital forensic efforts the FBI undertook to determine whether an unauthorized third party accessed Clinton’s server. Horowitz’s supplemental report was meant to rectify that gap. His findings on the matter left some lawmakers feeling that the Justice Department (DOJ) didn’t do enough to investigate the possibility the server was hacked.

“The inspector general did respond to our committee in terms of foreign infiltration into the Hilary Clinton server. Some members of Congress felt that the analysis done by the DOJ was less than robust and didn’t go far enough into the potential for some of the infiltration that whistleblowers had indicated to us had actually occurred.”

Peter Strzok, the FBI agent who led the Clinton email investigation, expressed intense bias against then-candidate Donald Trump and believed that Clinton should win the presidential election “100,000,000-0.” Horowitz concluded that Strzok’s bias cast a cloud over the investigation.

According to Meadows and Rep. Louie Gohmert (R-Texas), Strzok was one of the four FBI officials who attended a meeting with two members of the ICIG’s office—investigator Frank Rucker and attorney Jeanette McMillian. During that meeting, Rucker informed the FBI about the metadata anomaly. Meadows and Gohmert have suggested that Strzok ignored the lead.

The FBI declined to comment. Charles McCullough, who served as the ICIG during the FBI’s Clinton email investigation, didn’t respond to a request for comment.

According to a transcript of the closed-door testimony by Strzok reviewed by The Epoch Times, Strzok told members of Congress in June 2018 that he didn’t remember a meeting with the ICIG during which a discussion about changes in the metadata occurred. Strzok added that he wasn’t aware of anything in the Clinton email investigation that his team didn’t pursue.

Several other FBI and DOJ witnesses questioned by Congress about the matter claimed to have no memory of it.

When then-FBI Director James Comey exonerated Clinton in 2016, he stated that while the FBI was unable to find direct evidence of an intrusion into Clinton’s server, sophisticated foreign adversaries wouldn’t have left discoverable traces on the server. The bureau determined that “hostile actors” gained access to the private email accounts of people Clinton regularly communicated with. As secretary of state, Clinton sent and received work-related emails on the territories of foreign adversaries, Comey said.

“Given that combination of factors, we assess it is possible that hostile actors gained access to Secretary Clinton’s personal e-mail account,” Comey said on July 5, 2016.

Gohmert told The Epoch Times on June 26 that the U.S. intelligence community has established, without a doubt, that China hacked Clinton’s emails and that the FBI refused to examine the evidence.

Gohmert was the first lawmaker to publicly claim that China hacked Clinton’s server. President Donald Trump is the only other official to have made the same claim.

“Hillary Clinton’s Emails, many of which are Classified Information, got hacked by China,” Trump wrote on Twitter on Aug. 28, 2018.

Marc Ruskin, a 27-year veteran of the FBI, told The Epoch Times that Comey’s exoneration statement was so vague with regard to foreign intrusion into Clinton’s server that his statement may have covered the recent disclosures from Gohmert and Meadows.

The FBI documented at least four meetings with the ICIG before Strzok was assigned to the Clinton email investigation and transferred to headquarters from the bureau’s Washington field office. The meetings took place on July 10, July 13, July 22, and Aug. 3, 2015, according to documents the bureau released to the public since the closing of the investigation. Strzok began working on the Clinton email probe in late August 2015. The FBI didn’t release any documents memorializing meetings with the ICIG after Strzok arrived on the team.

Over the course of three months, midway through the investigation, all of the officials in the chain of command above Strzok, with the exception of Comey, were replaced allegedly due to retirements and promotions. The reshuffle brought in Andrew McCabe as the deputy director and attorney Lisa Page as his liaison with the Clinton email team.

Page and Strzok maintained an extramarital tryst throughout the Clinton email probe. Their biased text messages, expressing hatred toward Trump and preference for Clinton, served as the core evidence for Horowitz’s conclusion that bias had cast a cloud over the investigation. Several witnesses told the inspector general that Strzok circumvented the official chain of command by communicating directly with Page and thus to McCabe.

Ruskin told The Epoch Times it’s “unusual” for three senior-level executives to be replaced during a major investigation. Ruskin noted there would be an additional cause for concern if the outgoing officials didn’t go on to executive-level positions in the private sector immediately after leaving the FBI. In this case, two of the officials entered the private sector shortly after leaving the bureau and a third was promoted to a higher post at the bureau.

Executive Assistant Director John Giacalone became the vice president of Hilton Worldwide in March 2016 after he left the FBI the month before. Deputy Director Mark Giuliano became the chief security officer of Invesco Ltd. in February 2016 after he left the FBI the month prior. Executive Assistant Director Randall Coleman was promoted to the executive assistant director position of a different FBI division in December 2015.