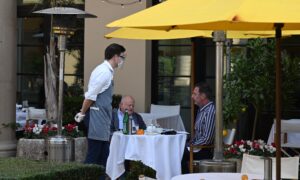 NEW YORK—Homeowners received some uplifting news on Thursday as the latest RealtyTrac report showed that real estate foreclosures slowed for the third consecutive month in October, a sign that the U.S. housing market may finally be stabilizing.

The best news is that some of the hardest hit states are seeing improvements. Arizona’s filings dropped more than 10 percent compared to September, but the figures remain high as 1 in 200 housing units were under foreclosure. Florida and Nevada both saw 4 percent drops in foreclosure rates compared to the same month last year, the first year-over-year improvement since 2006.

“Three consecutive monthly declines is unprecedented for our report, and on first blush an indication that the foreclosure tide may be turning,” said James J. Saccacio of RealtyTrac in a statement.

The main cause of foreclosures and mortgage defaults lies with the nation’s unemployment rate, as most states’ jobless rate still hovers above 10 percent with no improvement in sight. The federal government has pressured banks and lenders to ease restrictions on homeowners and renegotiate terms to some loans—such as the Making Home Affordable Act passed earlier this year—which has mitigated the rising rate of defaults and foreclosures.

“However, the fundamental forces driving foreclosure activity in this housing downturn—high-risk mortgages, negative equity, and unemployment—continue to loom over any nascent recovery,” Saccacio continued. “And despite all the efforts and resources directed at helping homeowners avoid foreclosure, we continue to see foreclosure activity levels that are substantially higher than a year ago in most states.”

Real estate prices across the United States are slowly recovering, but analysts say that the trend will depend on fluctuations in mortgage rates.

The seasonally adjusted 502,000 filings last week is lower than what economists expected and is a far cry from a peak of 674,000 seen in March.

While jobless claims are declining, the number of available jobs has not picked up—causing some analysts to worry that the lull in joblessness might be temporary. Nonetheless, retailers and investors are keenly eyeing the employment picture as the 2009 holiday shopping season approaches. Most market research firms project little or no increase in holiday sales from 2008, but much depends on consumers’ discretionary spending budgets.

“While layoffs have certainly declined in recent months, we still expect to see employers adding hours to their existing workforce before hiring will strongly increase,” said Gad Levanon, senior economist at The Conference Board, which publishes monthly employment forecasts.

Levanon predicted that “job losses will end in early 2010.”