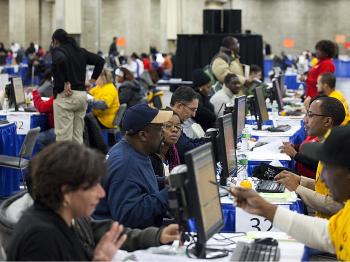 Homeowners sit with counselors with the Neighborhood Assistance Corporation of America to help them modify their mortgages at the Jacob Javits Convention Center on December 12, 2009 in New York City. Thousands of homeowners around the country have used NACA to lower their house payments and save their homes. (Michael Nagle/Getty Images)
Business & Economy

Foreclosure filings of 315,716—one in 409 households—in January 2010 are up 15 percent from the same month a year ago. The filings encompass house auctions, repossession notices, and defaults.

Filings exceeded 300,000 in 11 consecutive months, as loan modification programs offered by many banks and lenders in recent months failed to stem the amount of delinquent borrowers.

Despite an economy climbing out of recession in many respects, the real estate picture remains bleak. Last month, RealtyTrac reported that bank repossessions of homes might reach a record 3 million in 2010, despite the Obama administration’s recent Home Affordable Modification Program. Experts say that the federal loan modification program doesn’t target enough mortgage borrowers.

“If history repeats itself we will see a surge in the numbers over the next few months as lenders foreclose on delinquent loans where neither the existing loan modification programs or the new short sale and deed-in-lieu of foreclosure alternatives works,” said James Saccacio, CEO of RealtyTrac, in a recent statement.

One of the biggest issues plaguing homeowners is negative equity—or the value of the home being less than the amount owed in mortgage—which disqualifies homeowners from refinancing or selling their homes. Such borrowers are most likely to be in default, experts say.

Six states—California, Illinois, Arizona, Florida, Texas, and Michigan—account for nearly 60 percent of the nation’s total foreclosures, according to RealtyTrac.

For New York, foreclosures jumped 35 percent in January compared to a year ago. Brooklyn foreclosures are on the rise, along with foreclosures in Queens. According to data from the Daily News, one in every 1,836 households in New York City received a foreclosure notice.