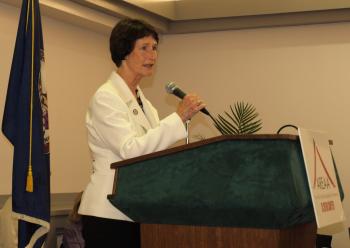 By Terri Wu
biggersmaller
Print
ANNANDALE, VA –May was the third month in a row when the number of foreclosures in the U.S. surpassed 300,000, according to RealtyTrac. This was 18 percent more than May of last year. Foreclosure has become a major issue in our communities. Many households with late mortgage payments or facing the danger of late mortgage payments have limited ways to contact their lenders. A waiting period of 6 months or longer is normal.

With cultural and language barriers, a foreclosure is even more difficult for Asians to handle.

To meet the acute need in our communities, the DC Metro chapter of Asian Real Estate Association of America (AREAA) hosted on Saturday, June 27, a foreclosure prevention event at the Ernst Community Cultural Center on the Annandale campus of Northern Virginia Community College. The purpose of the event was to provide direct access of lenders and non-profit housing counselors to struggling homeowners to address their problems and cases in person.

“We are very excited to host this event for our communities,” said Song Hutchins, Founding Chairwoman of the AREAA DC Metro chapter.

“Foreclosure has been an on-going issue in our society. Asians or non-Asians, we have all been impacted by it one way or another. AREAA DC Metro chapter is committed to lending support to communities with our robust community and business networks,” said Hutchins.

Mr. and Mrs. Lee bought their house in Annandale, Virginia in 2005. At that time, the market value of their home was over $400,000. They paid 20% down payment and were hoping to pay off the mortgage soon. However, shortly after they acquired the house, house prices started plummeting. Now the house is worth about $310,000. To make matters worse, Mr. Lee lost his job recently. With only Mrs. Lee’s income, they are already two months late on their mortgage payment.

Mr. and Mrs. Lee came to the Foreclosure Prevention Fair hosted by the DC Metro chapter of Asian Real Estate Association of America (AREAA), hoping to find a loan modification solution. After registration and filling out basic information such as income and expenses, they waited in line for a counselor with JPMorgan Chase.

The Lees were one of the over 200 families that obtained one-on-one confidential counseling at the Foreclosure Prevention Fair. For those whose mortgage loans were with Chase, Washington Mutual, EMC, Wells Fargo, Wachovia, or AMC, the families met the bank’s counselors in person. Others talked to counselors certified by the Department of Housing and Urban Development (HUD).

Most of the homeowners who talked to their lenders were happy that they finally obtained a direct channel and felt their cases were moving along in the right direction after being in the dark for months.

Mr. Lee immigrated to the U.S. in 2001 from Guangzhou, China. “You know, we Chinese don’t like to be late on our mortgage payments. If we had any other way to avoid this happening, we would have done it,” he said.

Lee said he tried to actively reach out to the Chase bank to seek a solution. He was told to register on a web site. Lee said that he didn’t get a response for two months.

Mr. and Mrs. Ngo’s loan is with Wells Fargo. “My husband is sick.” Mrs. Ngo talked with a soft, sad voice, “I cannot work full time like before. I have to take care of him. Our income became short. I am afraid of foreclosure.”

When asked whether they are already late on their mortgage payment, Mrs. Ngo said not yet. But their cash flow was running tighter and tighter. They started paying monthly payments via overnight mail or via calling. “It’s more and more difficult to keep up with the payments,” Mrs. Ngo said.

They had one-on-one session with a Wells Fargo counselor and then talked to a non-profit counselor and a Freddie Mac representative on site. Their Wells Fargo loan was acquired by Freddie Mac; therefore, they might qualify for the new “Home Affordable Refinance Program” (HARP) initiated by President Obama.

Leaving the fair, Mrs. Ngo didn’t disclose the details for their next step, but repeatedly thanked the volunteer translator, who helped the couple translate between English and Vietnamese, and thanked Ms. Julie Sun, the representative from Freddie Mac.

According to Danny Kim, President and CEO of Capital Point Funding Group, a lot of Asians are self-employed. It’s harder for a self-employed to get a loan. Kim doesn’t anticipate the tough loan situation to be alleviated this or next year.

Diane Lee, Chairwoman of Korean Realtor Association of Washington DC, is also an advisory board member for the DC Metro chapter of AREAA. She indicated that the “shame factor” was in play for many Asians. They are afraid of being identified as “having a foreclosure problem.” Therefore, they don’t seek help. She estimates that the need for foreclosure prevention help in the Asian community is much larger than what’s surfaced at this event.

In addition to encouraging the attendees of the event to share experiences with more people and actively seek outside help, Ms. Bulova mentioned the location of county foreclosure resources: www.fairfaxcounty.gov/foreclosures. From Monday through Friday, Fairfax County housing counselors are available from 1 to 4 p.m. at 703-246-5087. The next foreclosure clinic is scheduled on July 11 from 10 a.m. to 2 p.m. One can find out more by calling 703-222-8435.

Although the event was hosted by an Asian organization, people from other ethnic backgrounds attended. One Latino attendee arrived at 8 a.m., two hours before the event opened at 10 a.m.