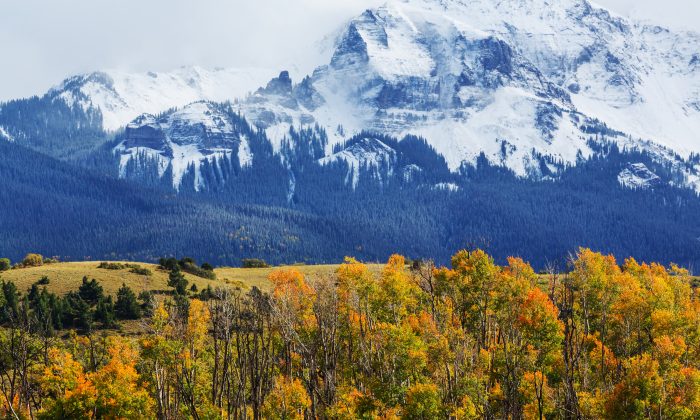 The Rocky Mountains in Colorado. (Galyna Andrushko/Shutterstock)
US

Forecast: Early Snow to Fall in Parts of the Rocky Mountains

The Rocky Mountains may be getting an early taste of winter this month.

Weather.com Meteorologist Domenica Davis predicted that there could be snowfall in parts of the mountain range this weekend, and said winter advisories are already in effect in some regions.

The National Oceanic and Atmospheric Administration (NOOA) in the Boulder–Denver area predicted that only areas with elevations of 10,000 feet of higher would see snow, and that it would be minimal.

However, Davis said that the snow in some areas could reach up to two feet.

The forecast snow is centered on the of juncture between Montana, Wyoming, and Idaho—in southwestern Montana, western Wyoming, and portions of Idaho from Thursday night into Saturday, Weather.com reports.

In other areas, it predicts a significant low-pressure system will produce widespread showers and thunderstorms from Idaho and Montana into northern Arizona.

Meanwhile parts of Colorado are experiencing record warm temperatures for this time of the year.

The National Oceanic and Atmospheric Administration (NOOA) said that Denver and Fort Collins had one of their top five warmest Septembers (from the 1st to the 13th) this year.

It also predicted that conditions will turn warmer and drier again next week.

This isn’t the first warm season snowfall in the area this year.

In May, Winter Storm Valerie dumped several feet of snow on parts of the Rockies. In some areas, the snowfall reached 40 inches, according to Weather.com.

While this isn’t unusual in the mountains, it is unusual for the low-lying areas.

At the time, several thousand Xcel Energy customers in Boulder and Jefferson County, Colorado, lost power, and a large stretch of I-80 in southern Wyoming was closed down, Weather.com reported.