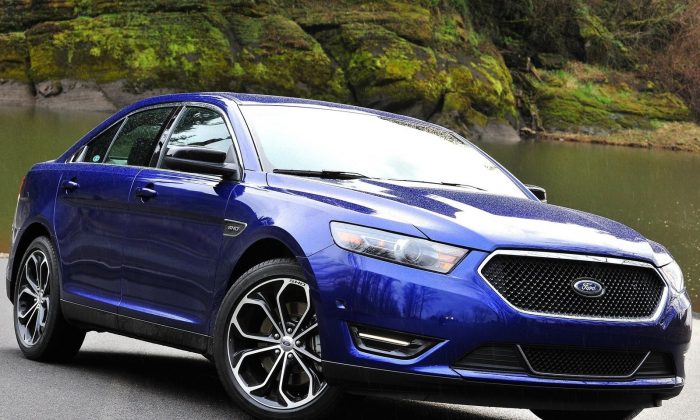 Ford Taurus SHO Has Grown Up, But Can Still Throw Down

Ford’s Taurus SHO has come full-circle, in some respects. When it exploded into the lineup way back in the late 1980s, during the Taurus’ first generation, it was a no-holds-barred bad boy, a family sedan blessed with a crazy-powerful engine and a sport suspension. The SHO was the sort of car that would hang out in dark alleys and mug unsuspecting passers-by.

It’s been through a few changes over the years; these days, it’s a sophisticated all-wheel drive sport sedan whose underpinnings also are used in the new Ford Police Interceptor. That’s right; Ford’s bad boy grew up to be a cop.

All that aside, the Taurus SHO is the top of the lineup and it’s a fantastic vehicle, representing much of what’s good about the Taurus lineup. And what’s good about it? Well, this tall full-size sedan has enough bulk to provide a comfortable ride that’s much more luxurious than the blue oval badge might suggest.

Of course, it wouldn’t have any kind of sports sedan credibility if it couldn’t actually perform. Ford hasn’t neglected this fact, and the SHO is equipped with a delightfully powerful twin-turbo V6 under the hood. With 365 horsepower at its disposal, the SHO will get up and move with an urgency that embarrasses similarly sized but more expensive vehicles. A six-speed automatic transmission is standard, and includes rev-matching paddle shifters on the steering wheel for quick manual shifts up and down.

All-wheel drive gets the power to the road in a speedy and stable fashion, so the Taurus SHO is confident in all conditions. If you can look beyond this car’s blue collar roots you’ll find a decent luxury-performance bargain, it turns out. In that, the SHO is the same giant-killer that it’s always been.

The suspension follows the MacPherson-strut front, multilink rear, layout used in the Taurus, but the SHO gets significant upgrades including sturdier hardware and a strut tower brace. The SHO is a big car, but it feels surprisingly light on its feet thanks to electronic power steering and a Torque Vectoring Control system that uses the brakes to mimic a limited-slip differential’s function.

Starting from the 2013 model year, there’s a Performance Package available for the SHO that adds retuned shocks and a stability control that can be turned off. Fade-resistant, high-fade brake pads are installed, and the electronic power steering has been calibrated for more direct response. The cooling system also is upgraded. Visually, unique 20-inch wheels and massive brake calipers distinguish Performance Package-equipped SHOs.

The SHO has always been something of a subtle vehicle in terms of styling. The Q-ship credibility stands in the latest model, which is distinguished from the cooking Taurus by a massive black mesh grille and striking, blacked-out, 19-inch wheels. Most of the brightwork has been darkened, giving the Taurus’ elegant, upright, looks a menacing tone. This SHO is the most distinctive the model has ever been, but it still takes a savvy car spotter to pick it out.

The SHO always has been able to compete with European sports sedans, but now it can match them in terms of luxury as well. There is space for five passengers in comfort, and the well-equipped Taurus SHO is outfitted like a luxury car. Navigation, heated seats, adaptive cruise control, and Bluetooth connectivity all are on the menu. So is the MyFord Touch infotainment system, whose simplified system of touch-screen ancillary controls and five-way buttons is the latest Big Thing in vehicle/human interface. MyFord Touch also interacts with smartphones to provide access to various music, news, and other applications directly through the car’s sound system via Bluetooth. It’s a handy way to take advantage of your phone without driving distractions. The SHO is available with an active parking assist as well.

SHO pricing starts at $39,980. That sounds like a lot for a Taurus, but the SHO has reached the point where it’s competing with some much more expensive vehicles. Don’t be fooled by the respectable exterior, because this luxury sport sedan’s ready to mix it up with Audi and Cadillac.