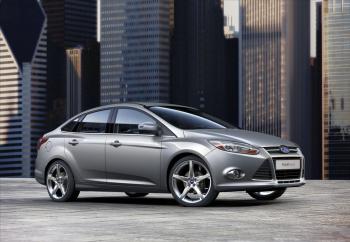 The awards pad recent accolades received by the automaker that as a whole, underscore the company’s ascension in the eyes of industry analysts.

Ford Fusion Hybrid won car of the year award, and its Transit Connect won the truck of the year award, decided by a panel of 50 automotive journalists from the United States and Canada. It was the third time in the award’s history that a single automaker took both awards.

Buick LaCrosse and Volkswagen Gold GTI were other finalists for the car award, while the Subaru Outback and Chevrolet Equinox were finalists for the truck category. Vehicles are decided by their innovation, safety, handling, performance, and value. Companies typically use the awards to promote and market the vehicles.

Last year’s winners were Hyundai Genesis for the car category and Ford F-150 for the truck category.

“Winning both of these prestigious awards is confirmation that the ONE Ford plan is working, delivering industry-leading products for our customers,” Mark Fields, president of Ford Americas, said in a statement.

This week, Ford also unveiled an all new Ford Focus, the result of the company’s newfound focus on small, fuel-efficient vehicles.

Analysts need to look no further than the Focus to see that Ford is serious about building small cars. For the first time in more than a decade, the Focus will no longer be its smallest car offering in 2010—this year, the company will bring the Ford Fiesta subcompact to North American markets. Fiesta was once of the best-selling cars in the European market.

To attract buyers, Ford has put equipment and features normally found on bigger vehicles into the Focus. ““The efficiencies generated by our new global C-car platform will enable us to provide Ford Focus customers with an affordable product offering quality, fuel efficiency, safety, and technology beyond their expectations,” Mulally said in a company statement.

The new Focus will go on sale later this year in North America and Europe.