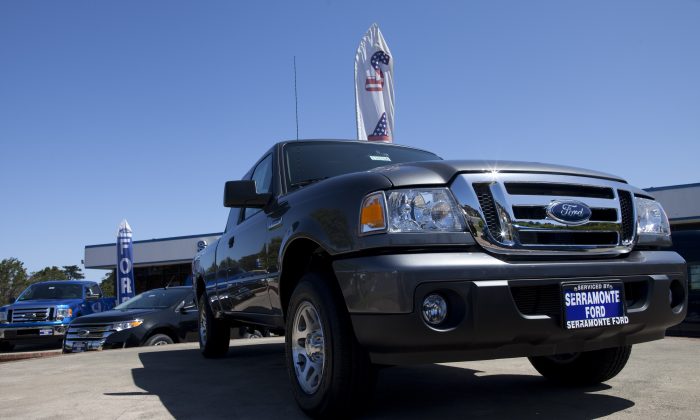 A Ford F-150 pickup is parked on the lot at the Serramonte Ford dealership on April 26, 2011 in Colma, California. The model could have a defect and is being investigated by the National Highway Traffic Safety Administration. (David Paul Morris/Getty Images)
Autos

Ford pickup safety concern: A federal agency is investigating complaints about “sharp reductions” in acceleration in some Ford F-150 pickups.

A Ford spokeswoman, Kelli Felker, wrote in an e-mail that the company was aware of the investigation and would cooperate with the National Highway Traffic Safety Administration, according to the New York Times.

“Attempting to pass a vehicle accelerating from 55 miles per hour and truck either stutters or stalls,” one owner wrote to the agency in February 2012. “This almost caused a head-on collision. I am scared to pull out in traffic or pass anyone.”

About one-third of the 95 complaints indicate that the incidents happened while people were driving in humid or rainy conditions, a focus of the investigation. No related crashes have been reported to date.