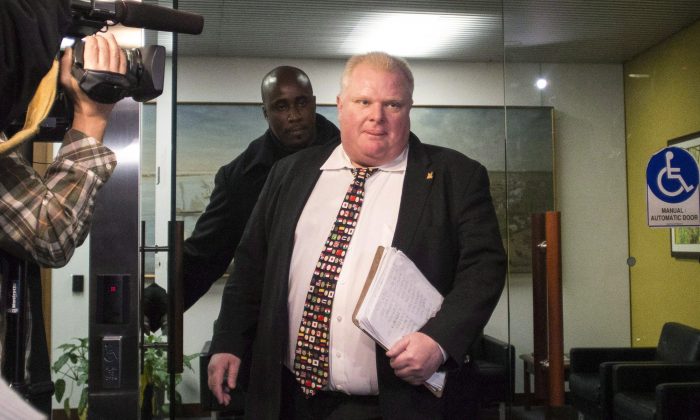 Mayor Rob Ford arrives at city hall in Toronto on Nov. 19, 2013. Newly released documents say police overheard alleged gang members on wiretaps talking about delivering drugs to Ford and having pictures of him using drugs, suggesting the images could be used for blackmail. (The Canadian Press/Chris Young)
Canada

TORONTO—A newly released document alleges police overheard suspected gang members discussing Toronto Mayor Rob Ford’s drug use and a video showing him smoking what appears to be crack cocaine. The allegations, heard by police through wiretaps, have not been tested in court.

According to the document, Mohamed Siad, a man identified as the alleged crack video’s owner, discussed selling a “tape” and mentioned Ford offering “5,000 and a car.”

Police believe the March 27 conversation referred to the mayor’s attempt to buy a video. In that same conversation, Siad said he would “ask for 150,” which police believe means he would ask Ford for $150,000 in exchange for the video.

Ford’s name allegedly emerged on the wiretaps about two months before the Toronto Star and U.S. website Gawker first reported that alleged drug dealers were shopping around a video that appeared to show Ford smoking crack cocaine.

Siad expressed fears for his safety after reports of the alleged video were published, according to the document. Another man talked of kidnapping Siad over the video and threatening to kill him.

The document also said that alleged gang members suggested they could use images they had of Ford using drugs for blackmail.

At least one alleged gang member said he had received marijuana from Ford’s friend and occasional driver, Alexander (Sandro) Lisi, in exchange for the mayor’s lost phone. Lisi’s is now facing drug and extortion charges.

Meanwhile, the Rob Ford saga has received more intensive media coverage in the United States than any other Canadian news story since the turn of the century, newly released media-monitoring figures suggest.

If the Toronto mayor were an advertiser trying to buy up all the global media space he occupied over the month of November, it would have cost him $1.1 billion, says an analysis by Influence Communications.

“No story in the 21st century has given Canada this much exposure,” said Jean-Francois Dumas, president of the Montreal-based media monitoring firm.

According to the Influence calculations, Ford was mentioned in 14,385 stories on U.S. TV, radio, websites and in newspapers between Nov. 4—the day before he admitted to having smoked crack cocaine “probably in one of my drunken stupors”—and Dec. 1.

Dumas said the story appeared in 75 countries and was the third most-covered story in the world on Nov. 6. Nearly 80 percent of the foreign coverage occurred in the U.S.

The analysis found that at its peak, the Ford saga drew 1.4 times the U.S. coverage of Quebec’s Lac-Megantic rail tragedy and twice that of the Robert Pickton murder trial.

It also received more coverage than both the Luka Magnotta story and that of Chris Hadfield, who became a global celebrity during his recent mission at the International Space Station.

The Ford brothers are well aware of their growing celebrity. They say they’ve turned down a slew of reality-show offers, although word emerged Wednesday that the mayor would soon be heard in a weekly CBS Radio segment called “Sports Junkies.”