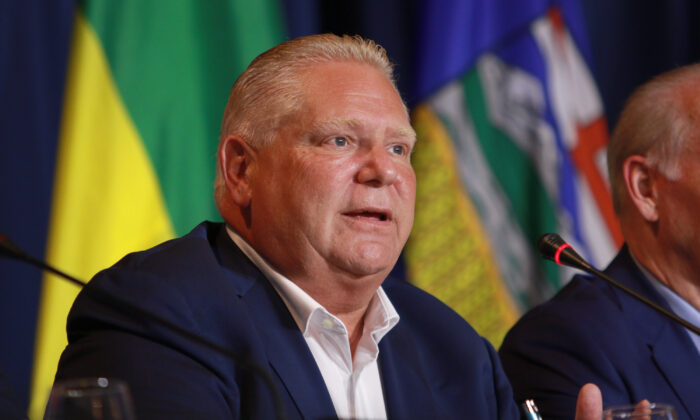 Premier Doug Ford responds to a question from the media at the Fairmont Empress in Victoria, B.C., on July 12, 2022. (The Canadian Press/Chad Hipolito)
Canada

The Ontario government led by Premier Doug Ford will end up outspending its Liberal predecessor Kathleen Wynne, and increase provincial debt despite its pre-election promises to cut spending, balance the budget, and shrink government debt, a new study shows.

“When in opposition, the PCs (Progressive Conservatives) frequently criticized the Liberal government’s spending, but now the Ford government plans to actually spend more than the Wynne government ever did,” study co-author Ben Eisen, senior fellow at the Fraser Institute, said in an Aug. 4 press release.

When Ford took office in June 2018 after defeating the Liberals in the provincial election, he promised a new fiscal direction for Ontario.

The study, titled “Ford Government Plans to Outspend Wynne Government,” finds that the latest budget brought forward by the PCs in late April will increase per-person program spending by 2.9 percent to $11,783, which is $282 more than the Wynne government spent during its last year in office. All figures exclude COVID-19 related spending and are adjusted for inflation, the authors said.

While the budget has yet to pass in the legislature, the Ford government forecasts a larger budget deficit inherited from the Wynne government, with the province’s per-person debt rising from $27,889 in 2021-22 to $28,930 in 2024-25, the study noted.

In a press release on April 28 when announcing the budget, the government said that “Ontario is projected to return to a surplus position by 2027-28.”

The Fraser Institute study has a different take on the PCs’ promises based on data collected from previous research.

“Past research has shown that following its election in 2018 and throughout its first term in office, Premier Doug Ford’s government largely neglected these commitments,” it said.

“Instead, since the Ford government took office, fiscal policy in Ontario has been largely characterized by continuity rather than change with respect to the levels of public spending and debt accumulation.”

Citing data from Statistics Canada, federal and provincial finance departments, the study found that the Ford government inherited a $3.7 billion deficit from the Liberals in 2017-18 before it doubled to $7.4 billion in the next fiscal year, and rose to $8.7 billion by 2019-20.

“We see that pre-pandemic, in the earliest years of the Ford government, deficits were substantially higher than in the late Wynne years, but lower than in the early years of Wynne’s time in office,” the authors said.

“In 2020/21 and 2021/22, real per person debt spiked, largely due to the spending related to the COVID-19 pandemic. However, the Ford government shows that it will continue to grow inflation-adjusted net debt per capita in the coming years, even though they will be basically unaffected by COVID-related spending.”

Eisen said the Ontario PCs need to make a drastic shift in fiscal policy to make good on their pre-election commitments.

“For the Ford government to fulfill its promises to restore Ontario’s finances, it must make a sharp course correction during its second term in office,” he said.