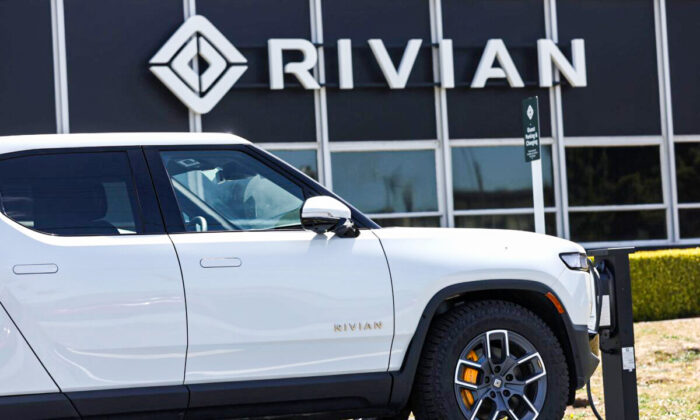 A Rivian electric pickup truck sits in a parking lot at a Rivian service center in South San Francisco on May 09, 2022. (Justin Sullivan/Getty Images)
Companies

By Riley Beggin
From The Detroit News

The letter from the nation’s four largest automakers comes as Democrats in Congress are negotiating with Sen. Joe Manchin, D-West Virginia, on the shape of a potential climate and energy package that originally included a controversial Manchin has called “ludicrous.”

Car buyers can currently qualify for up to $7,500 off the cost of a new electric vehicle—but only if the automaker has not yet sold 200,000 EVs. General Motors Co. and Tesla Inc. have already surpassed that number, disqualifying their customers from continuing to benefit, and Toyota is soon expected to hit the cap.

The automakers wrote that the tax credit has allowed auto companies “to offer more affordable products in greater volumes,” which has helped accelerate EV adoption.

“However, recent economic pressures and supply chain constraints are increasing the cost of manufacturing electrified vehicles which, in turn, puts pressure on the price to consumers,” they wrote in the letter addressed to Senate Majority Leader Chuck Schumer, Senate Minority Leader Mitch McConnell, Speaker of the House Nancy Pelosi and House Minority Leader Kevin McCarthy.

They asked the leaders to lift the 200,000 vehicle cap to be phased out “when the EV market is more mature” and argued eliminating the cap will incentivize people to buy EVs and provide certainty to customers and workers.

They added that China and the European Union are investing heavily in electrification.

“Our domestic policies must work to solidify our global leadership in the automotive industry,” they wrote. By eliminating the cap, “Congress will ensure that the U.S. continues to be a leader on EV innovation and production.”

The letter represents a change in the auto industry’s position on the credits—previously, the Detroit Three have supported a proposal put forward by Sen. Debbie Stabenow, D-Michigan, and Rep. Dan Kildee, D-Michigan, that would have eliminated the cap and raised the credits to provide up to $12,500 off the cost of buying a new EV.

That would have included a $4,500 credit for vehicles built in unionized assembly plants.

The proposal was included in President Joe Biden’s “Build Back Better” package, the social services and climate package that Democrats aimed to pass through Congress on a party-line vote.

But the union provision became a point of friction as other automakers without unionized workforces pushed back on the potential leg up for union-organized plants. Manchin, a centrist Democrat who wields immense power over the package, has repeatedly expressed misgivings about the EV tax credit proposal.

“When we can’t produce enough product for the people that want it and we’re still going to pay them to take it,” Manchin said during a Senate hearing in April. “It’s absolutely ludicrous in my mind.”

Toyota has an engine and transmission plant facility in Buffalo, West Virginia, which Manchin has visited several times.

The original EV tax credit proposal also faced criticism from major trading partners, including Canada. It was the focus of a White House visit by Canadian Prime Minister Justin Trudeau, and Canadian trade officials told the Biden administration the credits “would cause serious and irreparable harm” to both the Canadian and U.S. auto industry.